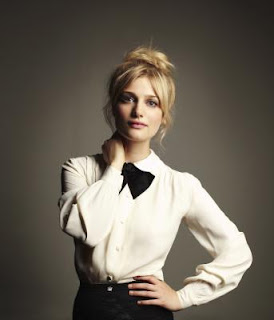 Sometimes in life you just need to let whatever that may be holding you back out and let it not define us, but shape us to who we want to be. For Alison Sudol aka A Fine Frenzy, letting out her deepest and darkest emotions have lead her to be the acclaimed artist that she is today. As she sets to release her album, Pines, which is a full multimedia project that encompasses a book and short animated film, A Fine Frenzy tackled all different genres to get what was building inside her to come out in the way it should.

Sudol, who moved from Seattle, Washington, to California as a young girl had what she called “a profound” influence on her work. “Seattle was a golden place. It has a reflective and clean tone of nature,” she told me on a recent press trip to New York City, “As a young girl I absorbed it.” Those tones of Seattle’s lush nature would impact her songwriting and storytelling years later, especially moving to an urban area like Los Angeles as a child, it was then her parents split up. It was that love of nature and natural landscapes that ended up, unintentionally, helping her title her new record, Pines. “It is an environment I loved so much, I wanted to write about it. I want to write about what moves us. When I am in those settings I could feel the innocence and freedom as I did when I was younger,” she said.

Now, at age 27, she, much like the rest of us, reflects on the childhood that shaped her and how she became the woman she is today. “I had a fear of traveling at one time because as a kid I associated it with a lack of stability,” before being able to go on her first tour about six years ago, she had to overcome this fear and “allow life happen,” as she put it. Once she was able to that, her career was able to take off. “I always felt a wall between me and those on the other side [of the wall]. I always thought you had to be a different human being to get to the other side of that wall. Then I saw that there is no other side and that there is no wall, you are you,” she said.

Now, as Pines waits to be released into the musical ether, Sodul crafted this record the way she intended. “The reason I make music and art is because I just want to communicate and hope and feel and I hope that someone will relate,” she said. After years on a major label and learning more about herself as an artist, musician and human being, A Fine Frenzy realized that the multi-media package that would become Pines needed to happen. “I did it without compromise. I didn’t compromise on what I was setting out to do. I approached this record differently and it was a much more organic, grass roots campaign,” she said. Taking inspiration from bands like Bon Iver, Grizzly Bear, Nick Drake and the Amelie soundtrack and film, Pines was designed. However, as she put it the record is “about moods, emotions and feelings and I wanted to explore all of this.” At nearly 70-minutes in length, Pines is a musical odyssey that brings the listener to various emotional landscapes and places. Whatever A Fine Frenzy intended on doing, she and her band achieved.

While many epiphanies and experiences lead Sudol, the woman that would become A Fine Frenzy, to the place and person she is today, she seems to be developing into an artist that will only become stronger over time.  As she staked her claim, “It is to go out and keep growing, it is just a moment of the bigger picture and I don’t know what is going to happen next, but all I want is to connect with people and the people I love.”

Posted by Salvatore Bono at 5:54 PM