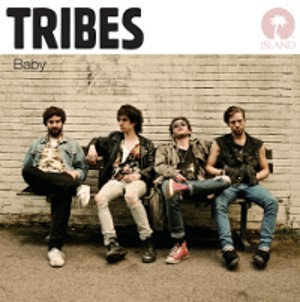 One of our favorite debuts of the year has come from English band, Tribes. Tribes blend 60's surf-rock and soul, 90's Britpop with modern garage rock hooks, think Dick Dale meets The Strokes with a splash of Blur. The bands debut, Baby, is a slick and catchy record that makes us just want to hit repeat over and over again. As the band drive their success back in the UK, they are already in California recording the follow-up to Baby. We spoke to singer and guitarist Johnny Lloyd about the bands formation, their music and wild nights being a rock star including an allegedly crazy incident with Juliette Lewis. Take a look at our interview with Johnny below.

The new record is titled, “Baby,” how did the retro / throwback to early rock and roll title come about?

We couldnt believe it hadn't been used and we wanted something simple and classic.

Much of the record is about relationships and religion; do you feel that writing about these topics it is easily relatable to anyone listening?

I think relationships and religion are the big issues for people of our generation. The album has been called nostalgic and I would agree with that. It was all about looking back on happier times when I wrote it.

Does going into the studio to record new material still give you the same aura of wonderment as it did when you first stepped into one?

Yes it does. We are very excited about starting work on the second album, recording is a inspiring thing to any musician.

How did the band come about?

Two sets of old friends with a love of rock and roll and loose music.

It has been said that Dan and Miguel met after Dan tried to steal Miguel’s wallet. How did that go from that situation to playing in a band together?

Thats how they met. They have been friends ever since.

You had a packed summer with a slew of festivals you are playing. What do you prefer – playing festivals to a ton of new faces or your own club gigs?

Its two very different things. We have a great time playing festivals but our club shows are pretty sacred to us.

Hailing from Camden Town, does that section of London influence your style and sound?

Yes it does. We love The Clash and Blur and we are very proud of being part of the next wave of north London rock and roll.

NME has listed you as the new poster boys for Britpop, do you agree with this? Any pressure applied with a title such as that?

Britpop doesn't exist anymore in the UK it was very much a 90's fad. Poster boys? I'm not sure about that.

You have taken a big influence from 90’s American bands. What is it about their sound that has influenced you?

I love REM and early Americana . Lyrically this country has more to offer than anywhere elese in the world. We are huge blues fans and so American culture and music has been in our blood from an early age. Its fantastic being here.

Bands like Chapel Club, The Vaccines, The Heartbreaks, Sulk, Zulu Winter have been making a big splash and tossing British rock back on the map. How do you set yourself apart from the pact?

- We feel we have more to offer song wise. We touch on subjects other bands don't. We rely on the depth of our music to seperate us from the pack.

BURNING QUESTION – is it true Johnny got drunk with Julliete Lewis and ended up tattooed?

I can't even answer that i was too far gone, but the tattoo is still there.

Posted by Salvatore Bono at 7:52 AM