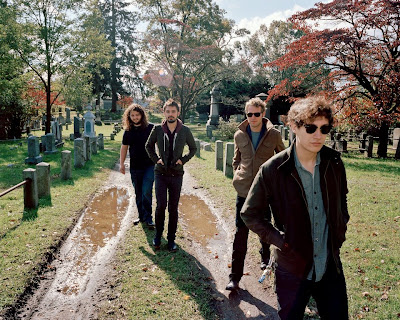 While Washington state at one point was the center of the musical landscape thanks to Seattle's grunge scene, the Pacific Northwest state has still been cranking out great bands since the end of the 90's grunge-era. Certainly we all know Death Cab For Cutie help carve out the new indie soundscape for the area, but The Lonely Forrest are carrying the torch. The band, who have been around since 2005, released their second LP last year, Arrows to rave reviews. They have been on the road this year with Portugal. The Man and Minus the Bear. We spoke to singer John Van Deusen about the bands sound, recording style, influences and touring the country with some of today's hottest bands. Take a look at our interview with Deusen below:

Hailing from Washington State, a place deep with American music roots, were you inspired by the artists from there that came before you?

I think Pacific Northwest rock music has played the biggest role in influencing our sound. Clearly we grew up around Nirvana, Soundgarden, Seaweed, The Posies, Beat Happening and many others. Combine those bands with all of the talented local bands that share our scene, and it's hard to escape their presence in our music.

The sound of the band is very unique, who are some of your influences?

I'd say Nirvana + Doves + My Bloody Valentine + The National + XTC + The Police + REM and many many more.

You signed to fellow Washington state resident, Chris Walla’s label, who sought who out? Did he find out about you or did you contact him?

Chris bought our second full length record, "We Sing The Body Electric!" after reading a positive review in The Stranger. We then got the chance to meet him backstage at a Death Cab show and it grew in to a friendship from there.

When you signed with him, you were the first band to sign with that label. Did things begin to change for you as a band?

Things changed when we signed with Trans. It was our first national release and we started touring nationally after the record came out. We started to feel like professional musicians for the first time.

You released your last record, Arrows, last year. What was it like making that album?

We had a lot of fun making Arrows with Chris. Personally, I spent a lot of time playing video games (when I wasn't recording). We had the privilege of recording at Sound City in LA which was a dream come true. I recorded my vocals right where Kurt recorded the vocals for Nevermind, which kind of freaked me out a little.

Are you currently working on new material?

We are always working on new material. Currently, we are in the process of choosing which songs to record for our next record.

Much of your music comes from literary works. From the name of the band being a reference to The Silver Chair and making references to Walt Witman. What other writes inspire you?

Books influence my lyrics and song titles more than anything else. Ray Bradbury, Issac Asimov and Ursula Le Guin hold the top spots in my heart right next to Kurt Vonnegut and Joseph Heller.

Are the literary references intentional so fans can try and decipher what everything means?

My literary references are very intentional. I started doing it so that the kids listening would investigate the titles and eventually end up reading the books.

What does your music mean to you?

All of our songs hold special places in my heart, especially the ones that came out of personal heartbreak and/or joy. I can think back and remember what I was going through when I wrote all of them.

What has been the best thing about Lonely Forest?

I'd say the best thing about the Lonely Forest has been all of the stories the four of us have accumulated over our time together. We've been through some crazy shit together. It's been real.

You were on the road with Portugal. The Man last Spring,  how was that tour?

Honestly, this tour has been one of the more interesting tours we've ever been on. In some ways it's been a total shit show and in other ways it's been crazy fun. The PTM guys are really cool and relaxed, which makes for a good touring environment.

You have been on the road with some heavy hitters aside from PTM, you hit the road with Two Door Cinema Club and Minus The Bear. How do you win audiences over knowing that a majority of faces in the crowd are there for someone else?

This has been a constant battle for us because like you said, we have toured with a handful of big bands that draw large crowds. Our method is simple though... we come prepared every night and play our songs as honestly as we can. People tend to respond well to sincere performances.

Posted by Salvatore Bono at 8:39 AM