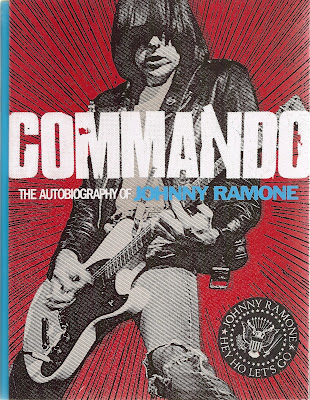 Of all the books written about The Ramones, none of the books have ever come from a member of the band until this past Spring. The wife and estate of Ramones guitarist, Johnny Ramone, released the appropriately titled, Commando. It was the first autobiography written by a Ramone and delivered posthumously. Johnny, who died in September 2004 of cancer was the commanding officer of the greatest band to ever come from New York City and the Godfathers of Punk Rock.

Commando is Johnny's story as to how The Ramones formed, how he ruled with an iron fist and his thoughts on everyone in the band and the music business. Johnny, who was very straight forward with his approach to everything from his relationships, to friends and career, he showcases how is go-get-them personality really came into effect. Yet, unlike any autobiography ever written, the best parts of the book come from Johnny's personal lists where he dishes his top 10 lists on everything from "Top 10 Republicans" to the best baseball players, to best rock and roll bands, to best Elvis songs. Featuring rare photographs and diary entries, Commando may not be a deep read but worth checking out for any fan of The Ramones.
Posted by Salvatore Bono at 5:05 PM