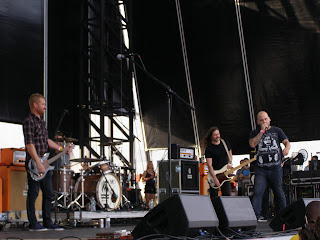 Ear piercing vocals, side splitting drums, roaring guitars, gut pounding bass - The Bronx are one of the most vicious bands to emerge from the West Coast in years. The Bronx, who also go by their alter ego, Marachi El Bronx, have gained popularity over the word due to their sound and wild stage shows. After touring for most of this summer, the band began recording their new album, The Bronx IV and is slated to come out next year. We spoke to guitarist Joby J. Ford about the bands history, fun facts and their new record and what it was like to portray Black Flag in a movie.

Hailing from Los Angeles, how did you end up calling yourselves The Bronx?

At the time we started the bad (10 years ago) was around the height of the "Coast Rivalries" in hip-hop. It was so ridiculous and we followed it pretty religiously and so we thought a witty idea would be to lift a name from the other coast.

Over the years the band has received and lost many members, has the change in rotation impacted your sound or do the members coming in know what they have to do?

in the Bronx we have only changed a bass player. Our previous bass player James moved on with his life, and we recruited Brad Magers to play bass in the Bronx and trumpet in Mariachi El Bronx. In the Bronx sometimes I cant make certain shows or tours due to family priorities, so often Vincent Hidalgo will fill in for me on guitar. At this point the 2 bands have co-existed with each other for quite some time, and most member can fill another’s shoes if the situation arises.

Three albums in, all self-titled, are we going to hear a new record from you guys soon?

Yes! We finished Bronx IV about a month ago and I believe its slated for release mid January of next year. There should be a few singles trickling in over the next few months.

Given the nature of the bands music, when you are recording an album, do you try and capture a “live” feel or just go balls to the wall and record what feels right?

Probably a bit of both. We have the luxury of having our own recording studio which can sometimes pose a problem because you have unlimited studio time. Things have gotten completely out of control in the past. I think there is a maturity in making a record where we are all at and having years of experience in doing so, and not letting yourself go down the road of - lets try this, what about this, lets do this and then you end up with fuck soup. We have learned how to record our band and how we like it to sound, this has taken years to figure it out, but these days we are a pretty well oiled machine

Your live shows are some of the most brutal and amazing things I have ever witnessed, what is it like to have such power over the audience?

No idea... I am just trying to keep my gear together and crossing my fingers my amps will make it through another show!

You guys really give it your all on stage, how exhausted do you feel walking off that stage every night?

I don't think its really the show that wears (me personally) out, its all the planes, buses, different time zones that takes its toll these days.

Mariachi El Bronx has taken off in such a big way, which do you prefer doing?

I like them both equally. They are like children, both completely different but asking me to choose between the 2 is impossible.

Will there be another Mariachi record in the future too?

Yes - taking a break from writing new tunes to do this interview as we speak....

You have gone from indie labels to major labels to doing things on your own, seeing all sides of the business, what advice would you give any young band or artist starting out today?

Everything is fucked. He who gets fucked less wins.... ! hah! I don't know. Its changed so much over the years its kinda hard to keep up with it. I "think" we are slowly coming to a point in music where it is so much easier to be self-sufficient. I think that is really the way to do it. Its strange to, I see a lot of these labels that flourished in the 90's offering bands horrible, horrible deals, so they (the label) can still continue to exist as it pleases although no-one is buying records. There is still this weird mindset that bands need to be signed to labels. I think it is relatively irrelevant. Now most everyone has the ability to record music, wasn't always that way. "If" you could find someone to give you free studio time you still had to buy tape, record at night when no one was in the studio and on and on and on....  and it was just a nightmare - bands succeeded that had money - plain and simple - now I think if you can make great music, you will succeed. And everyone can do it on a laptop these days, even their phones.

Playing in two bands with two different sounds, how do you feel about music today? You all are much more versatile than other bands since you are doing both bands, but does that leave room for you to find issues with the business or appeal?

I still feel the same about music today as when I heard a record for the first time... it excites me! I think as long as you play music you will always have an issue with the business side of things. It’s terrible. But it’s the way it is. You learn a lot along the way, and more so what works for you. Some people want to be the face of a clothing, vodka, shoe, and guitar - company. That to them is success, some people want to play shows on the weekends - that is success, some people align success with being signed to a label that put out a couple cool records in the past and no on has ever heard of said label.... its all subjective - I think knowing what you want to achieve and get out of music is the real key.

A decade into The Bronx being in existence, what has been the biggest achievement for the band?

I would say longevity. Still making music and playing together, everyone gets along and we enjoy what we are doing.

One of my favorite things about the band is that you appeared as Black Flag in “What We Do Is Secret,” how did that come about and how thrilled were you to portray one of California’s greatest?

It was really fun. That was my first movie. Pat Smear actually called me. I didn't believe it was him so I hung up. blah blah blah.... we ended up doing the film. I still don't think we really looked like Black Flag though. But I'm sure that want really the point.
Posted by Salvatore Bono at 9:09 AM