In 2004 The National showed their support for then presidential nominee Barack Obama by selling shirts on their website and at gigs that featured Obama's face and the words "Mr. November" underneath. The title "Mr. November," of course comes from the title of one of the bands songs. Yet, four years later, as the band rallies behind the president now to show support in Ohio (Where the band members grew up before all moving to Brooklyn), they have been receiving "Hate Mail" via Facebook.  In an interview with Ohio State's The Lantern, singer Matt Berninger said, “This is more important than a rock band. I know we’ve gotten responses from people (who) don’t like the fact that we’ve taken a position on it, and I don’t actually think artists or musicians necessarily have a responsibility to do that. But in our case, the five of us … talked about it and we were like, 'Yeah, it’s worth it, for sure.'" Meanwhile, in other National news, the band are currently in the studio working on the follow-up to 2010's High Violet.

Speaking of live albums, Jay-Z will release a Live in Brooklyn EP to celebrate the grand opening of The Barclay's Center in Brooklyn, which he is part owner. Take a look at the cover below: 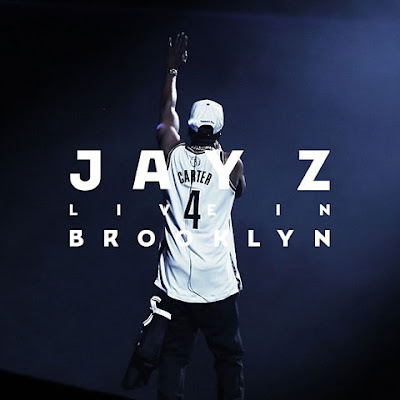 While in NYC this week to speak and perform at the Partners in Health event, Arcade Fire also debuted a brand new song for those in attendance. Take a look at video of the band performing "Crucified Again."

Posted by Salvatore Bono at 7:18 AM