The Beach Boys saga is one for the record books at this point. After being allegedly being kicked out of the band, Brian Wilson penned a letter to his cousin and band leader, Mike Love (who also owns The Beach Boys name) and said, "I was completely blindsided by his press release. I had no idea that it was coming out, since it was crafted by Mike’s personal PR firm without my knowledge or approval. No one in my camp would have approved it or the timing... I'm disappointed that Mike would now say that the release was done at the request of my representative... We hadn't even discussed as a band what we were going to do with all the offers that were coming in for more 50th shows." Wilson goes on to say, "While I appreciate the nice cool things Mike said about me in his letter, and I do and always will love him as my cousin and bandmate, at the same time I’m still left wondering why he doesn’t want to continue this great trip we're on. Al and I want to keep going because we believe we owe it to the music. That's it in a nutshell, all these conversations need to be between the shareholders, and I welcome Mike to call me."

File under - FUCK YES - Rage Against the Machine will be re-releasing their landmark self-titled debut for it's 20th anniversary this November. The record, which is called Rage Against the Machine - XX, will arrive on multiple formats including, a CD with three bonus tracks, a double CD with a bonus DVD, and a box set containing the double CD, two DVDs, a vinyl LP, a two-sided poster, and a 40-page booklet. Two different vinyl editions, one a picture disc, will also be released, with no bonus tracks. Public Enemy's Chuck D has penned special and new liner notes for the editions.

Pharell Williams has been in the studio working on a new record and on Tuesday morning he confirmed he is working with Frank Ocean and Jay-Z by tweeting a picture of the three titans in the lab. Take a look at the photo below: 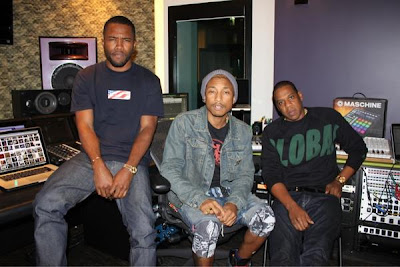 Crystal Castles released the tracklisting to their new record, another self-titled album, which is being called III by journalists and fans. Take a look at the tracklisting below:
01 Plague
02 Kerosene
03 Wrath of God
04 Affection
05 Pale Flesh
06 Sad Eyes
07 Insulin
08 Transgender
09 Violent Youth
10 Telepath
11 Mercenary
12 Child I Will Hurt You
Posted by Salvatore Bono at 5:08 PM