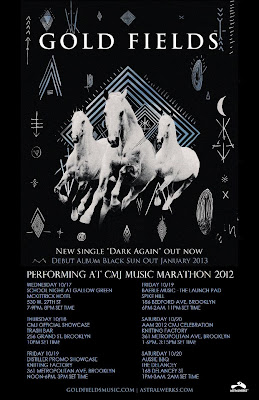 From Ballarat to the Big Apple, Australia's Gold Fields and one of our favorite discoveries of 2012 barnstormed through New York City for the 2012 CMJ Music Marathon. The band, who just released their new single, "Dark Again" via Astrelwerks, has gained much attention since their NYC debut in March and after I named them, "One of the most impressive live bands you will ever witness," for Officially A Yuppie and The Huffington Post, Gold Fields have continued to make me proud and prove me right.

After returning to the U.S. at the top of the month for a small tour, the band drove 10 hours last Tuesday after a gig in Ohio to New York City to play their first gig at the Gallow Green rooftop at McKittrick Hotel in Chelsea on Wednesday. On a cool night in NYC, Gold Fields turned up the heat on the posh rooftop bar to a packed place of unknown eyes whose jaws were collectively on the floor watching this band shake from the top of the building right down to the foundation. No exaggeration, the rickety elevator in the building shook as if there was an earthquake happening as the band played on top of the swanky hotel. Yet, that was only another day at the office for Gold Fields as they still had another gig that night at Rose Bar and then six more shows through the weekend, plus countless hours of press and appearances to make. Needless to say, Gold Fields were thrust into the limelight and made everyone who has supported them proud and ecstatic that this small band from the middle of nowhere can pick up some buzz at a legendary music conference.

Adding to the caravan of press chomping at the bit to speak to Australia's new buzz band, we had the chance to speak to drummer Vinci Andanar about their CMJ experience. Take a look below:

How as the tour of the US been?

So far so good! A lot of driving but it's great being on the road and actually seeing the country. The last two times we were here, we only got to see a few places but this time around we've managed to see a lot of cities.

What is it like touring in a relatively new country and being unknowns?

It's very exciting. There's no expectations on the shows. The crowds so far have been really great. It's weird seeing people singing along. We're so far from home.

We played our last show last night at Aussie BBQ. It's a show full of Australian bands so it was great catching up with a few familiar faces. CMJ was pretty busy for us. We played eight shows in four days so it was pretty hectic at times. There was a good vibe throughout CMJ and all the punters really got into it, which is great!

We have a music conference in Brisbane called Big Sound that goes for a few days where bands get to showcase their music. I think that would be very similar but we haven't played that yet.

Do you feel like this is the Olympics and you are representing Australia and looking to make them proud back home?

I guess you could say that? Not too sure how much of what happens here actually gets filtered through back home. Our family and friends are very supportive and hopefully we're making them proud.

How are American audiences different from Australian Audiences?

It seems that Americans warm to us a bit quicker but we think it's just because we have weird accents.

How are NYC audiences different from everyone else?

It seems like people in New York really love their music and like to support bands so its good for young musicians like us to be able to perform in front of them.

Is it intimidating to play a festival that got international bands like U2, Arcade Fire, Oasis, The Verve, and many others put on the musical map?

It's more surreal than anything.

After CMJ what is next for you?

Our tour with Diamond Rings starts this Friday (26th) in Chicago. Excited to get on the road again and see more of the country and play more shows.
Posted by Salvatore Bono at 8:49 AM