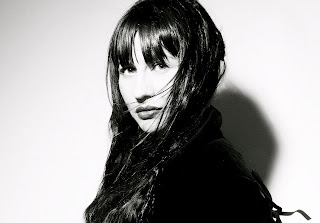 After being an original member of Dum Dum Girls, Crystal Stilts, and Vivian Girls, instrumentalist and singer, Frankie Rose decided it was best she went on her own in 2010. The plan, thus far seems to be working, it also seems that whatever the Brooklyn musician gets involved in seems to attract acclaim. Rose, who releasing one of this years most praised albums, Intersteller, has lit up stages and wowed audiences at SXSW and this week at CMJ. We spoke to Rose about her work, being a Brooklyn artist and being on her own. Take a look at our interview with Rose below:


What did you do differently on “Interstellar,” than on your debut?

I worked with a wonderful producer that helped me to make decisions in the studio that I might not have made on my own...

Being this is your second album, are you finding your groove more as a solo artist?

Yes. It is a position I am very comfortable with.

Being based in Brooklyn, has the borough inspired any of your work?

Not so much. I dont think my surroundings have an influence on me.

With so many artists hailing from the borough now, do you feel that there is camaraderie among the artists or everyone is battling each other and fighting competition?

I dont spend much time thinking about what other musicians are doing. There is not enough time in the day. I have many friends that play music and I support their musical endeavors as they support mine!

Your first single from “Interstellar” hit the internet and straight away caused a nice buzz. Now that music is so accessible and so fast as to how people get it, as an artist do you still put time into crafting the album art and packaging in the age of digital music and blogs?

I dont make music for other people. I make records because it is enjoyable for me. I am lucky because some people like it. How long it takes people to get it  or weather it is regarded as disposable has nothing to do with my process as an artist/ musician.

What was the one song from “Interstellar” that you just absolutely loved and could not wait to record and release?

I feel the same way about all the songs on the record.

Hailing from three acclaimed bands, what was it like for the first time making music on your own?

Much easier, as it is my own, one single vision. Much less decision making.

Do you ever miss working in any of those bands?

Given the success that you had with the other bands you were in, now on your own and starting all over again, does it bring back early memories of the road and pounding the pavement making it in an indie band?

I think I had a very good foundation when i started so it was not so hard to pick up where I left off..

Has anyone from any of your former bands work with you on your solo music?

You released your first album under the moniker – “Frankie Rose and the Outs,” and now it is all just your name, why did you choose to drop the moniker? Does it signify that you are really stepping out more and more on your own?

I just didnt like the name. Its much shorter now. The records were recorded give or take in the same fashion.

Your music is very unique and has a throwback sound to the 80’s, who are some of your influences?

What has been the best thing about being Miss Frankie Rose?

I am  Truly Blessed. Thank you!
Posted by Salvatore Bono at 6:49 AM