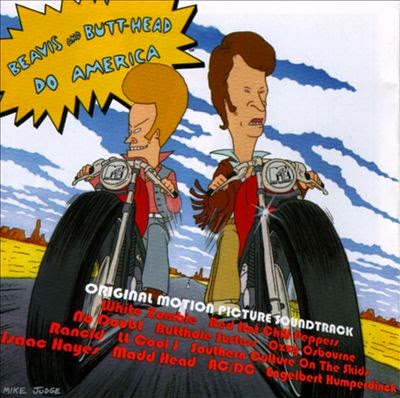 When it first arrived in theaters in 1996, Beavis & Butt-Head Do America had the highest grossing opening for a December film in history. It would eventually be beaten by Scream 2 and a little film called Titanic but the two slacker cartoon characters from MTV rode high in the Silver Screen. The celebrated characters from the brain of Mike Judge defined the 1990's and their film brought that success full circle. While the film is still a cult classic, it's soundtrack is one of the most unique gatherings of artist on one disc.

The soundtrack to Do America was not your typical movie soundtrack - it featured everyone from 90's favorites like No Doubt, White Zombie, and Rancid as well as LL Cool J, Isaac Hayes, Red Hot Chili Peppers, AC / DC, Butthole Surfers and most surprisingly, Engelbert Humperdink. Not to mention music from Madd Head, Southern Culture on the Skids and Ozzy, Do America captured a decade whose sound was all over the place and put it on wax. Whether the producers behind the soundtrack intended to do it or not, this soundtrack may or may not take you back into the film but it will certainly take you back to that era.
Posted by Salvatore Bono at 5:11 PM