Haim have confirmed they are in the studio working on their sophomore album. No release date has been set, but speculation seems to believe that the record could arrive before the year's end.

The Strokes' Nikolai Fraiture has started a new band called Summer Moon. The band also features members of Au Revoir Simone and The Like. No word yet if the band are going to record.

Work has begun on Run the Jewels' cat-inspired album, Meow the Jewels. Speaking to NME, El-P said that the fan-funded project to transform the band's music into cat noises is taking flight. El-P said, "Meow The Jewels has just started production. We were handling all of the charitable aspect and getting money to where we had to get it first, and we'll be making an announcement about that soon. I'm not sure how long the whole thing will take because it's not all in my hands – we've got a bunch of people and producers on board to make cat noises and I need to wrangle it all together. Everybody announced so far is still involved – Prince Paul, Dan the Automater, Just Blaze, Skywlkr, Baauer, Zola Jesus, Gaslamp Killer and myself. There's a lot of really amazing people involved – which is ridiculous, considering that if I actually had to make real music then it might have been the greatest album ever made!"

One of the many former members of The Fall, Brix Star-Smith is set to release her memoirs next year titled The Rise, The Fall & The Rise. Star-Smith was a key member of the band in the 1980's and was married to leader and singer Mark E. Smith.

The City of Portland, Oregon, has announced that today is Decemberists Day in celebration of the band's new album. Take a look at the Proclamation below: 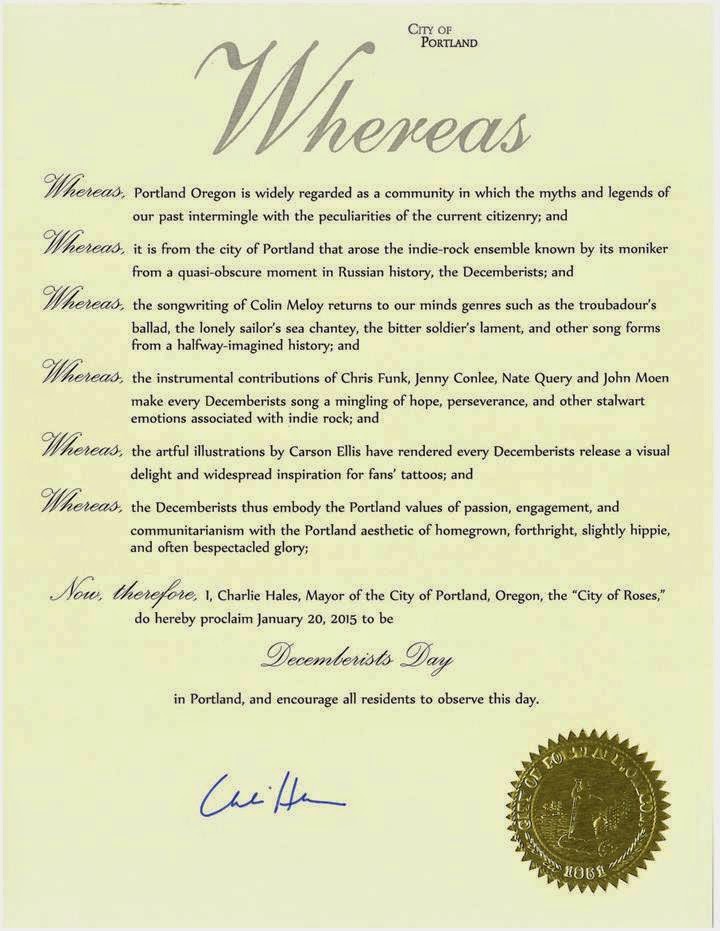 Posted by Salvatore Bono at 3:48 PM