Noel Gallagher is giving Oasis fans the slightest glimmer of hope that the iconic band will reform one day, but there is a catch. Telling Q magazine, Gallagher says Oasis will only reunite for the money. He said, "Nobody has made us an offer. I’ve been in the same room as Liam, and even then nobody’s said, 'Weren’t Oasis great? You should re-form.'" Gallagher says. "But if I was ever going to do it, it would only be for the money. This isn't me putting it out there, by the way. Would I do it for charity? No way. We’re not that kind of people. For Glastonbury? I don’t think Michael Eavis has got enough money. But would we get back together one day? As long as everybody is still alive and still has their hair, it’s always a possibility. But only for the money."

Ever wonder what it would be like to work with Bjork? Venezuelan producer Arca, who just worked on the Icelandic princesses latest, Vulnicura, tells The Fader what the experience is like, saying, "The amount of trust that she placed in me, and the amount of trust I placed in her from the get-go, set the tone for our working together. It was weirdly enlightening, exciting, ecstatic, celebratory, interesting, and therapeutic—everything that an artistic collaboration should be."

The most surprising thing about Madonna's new album, Rebel Heart, is not that it was leaked months in advance or rushed to iTunes, it is that boxing champ and pop culture icon Mike Tyson raps on the record. Tyson explained what happened to Rolling Stone and how he appeared alongside Nas on Madge's song, "Iconic." The champ said, "Madonna calls you and tells you to come somewhere, you go. I didn't know what the hell I was going there for. I'm just there having a good time and hanging out with Madonna. She has her producer there and I go into the studio and I didn't know if she wanted me to talk or rap. I just go in there and start talking. I'm talking about my life and things that I have endured. I'm saying some really crazy stuff. It was really intense." Tyson then said he drew inspiration from former Italian fascist leader Benito Mussolini, saying, "When I did it, I think about being some guy like Mussolini and they're really arrogant, but you try to come from a positive perspective and be uplifting. You watch Mussolini on television — even though we don't understand what he's saying — he is so mesmerizing. I look at myself in that way. I know people may say 'this guy's a fascist' and all this stuff, but man, you can take positivity from watching him. No wonder why Hitler was attracted to him. This guy's a hypnotic figure. There's so much pride behind what he's saying. I'm not even Italian and I feel the pride he's projecting. He had that street swag; he was doing this stuff with his hands and moving his head before it was even hip-hop."

Next month, Pharrell will be one of the latest in a long line of musical guests to make an appearance on The Simpsons. Take a look at Pharrell-Simpsonophied, below, the episode airs on February 8. 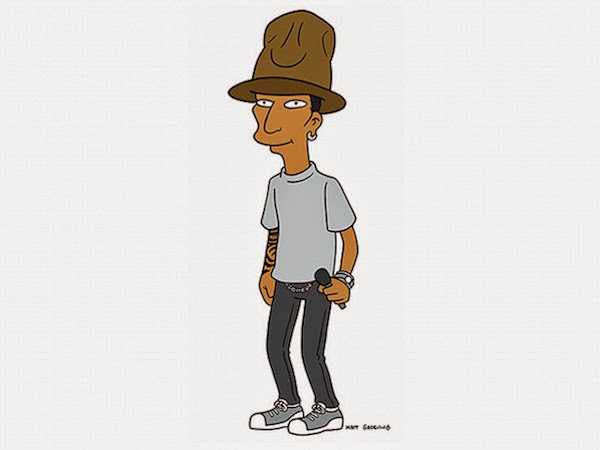 Posted by Salvatore Bono at 8:26 AM