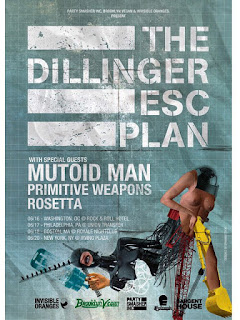 "You are not going to let me fucking die, right?" Dillinger Escape Plan singer Greg Puciato said looking down to the crowd as he scaled the railings of the second floor of Irving Plaza. Within minutes of his band coming on stage, Puciato was already bored of traditional screaming / singing right at the crowd, so he upped the ante and began climbing whatever was in his way in the venue to go higher and higher before he jumped into the audience during the opening song, "Prancer." This was how Dillinger Escape Plan said hello to New York City and goodbye to their current tour. 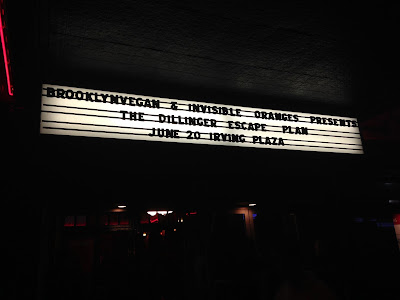 In the final night of their spring tour, the band played a sold-out Irving Plaza and turned the venue upside down on Saturday night. If the sounds of bones breaking and limbs separating from bodies had a soundtrack, it would be set to this band. With the destructive stage abilities of an early punk band mixed with the bone crunching thrash of Slayer and the technical abilities of some of the finest jazz bands, Dillinger Escape Plan take everything and multiply it to the 100th power and then add more when they do it live. Songs like "Milk Lizard," "Happiness is a Smile," and "One of Us is the Killer," were a three way punch to the crowd of sonic intensity and no one seemed to mind. This is how everyone in that room wanted it to be -- loud, chaotic, and intense. 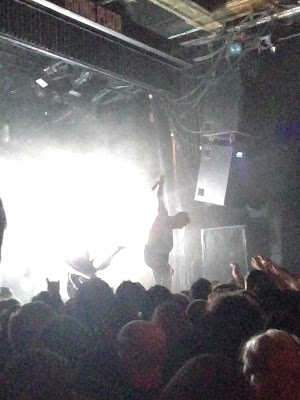 In the 65 minutes they were on stage, Dillinger Escape Plan left their mark and then some. Drummer Billy Rhymer's body moves so fast behind his kit, it is almost as if he doesn't have time to think. Guitarist Ben Weinman is the Keith Richards to Puciano's Jagger, he wants to join in on the fun and still abuse his instrument. He too would climb parts of the stage and perform without missing a beat. Yet, it was Puciano who would steal the show. For the grand finale of "43% Burnt," he went across the railings of Irving Plaza's second floor again and made his way to the middle of the venue, up top to the soundboard and took a leap of faith jumping two stories into the crowd, all while screaming his lungs out. What is fascinating is how this band abuses not just their gear but themselves night after night to please their audience, but this is why this band needs to be experienced in concert. It was one of the most incredible performances and gigs New York City has seen in a long time. 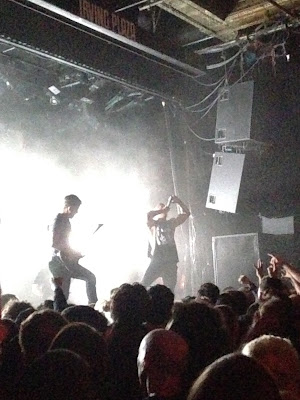