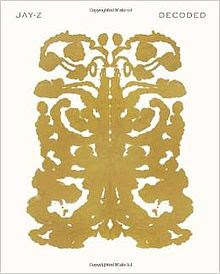 Whenever Jay Z does something, anything, even removing the hyphen between his name, it is a big deal. So, in 2010 when he released his autobiography and memoir, Decoded, fans got a chance to not just read the backstory of their favorite rapper but hear how he came up. It was the first time he spoke about his life and didn't use beat. It was an candid and intimate look at a man who is used to flaunting how great his life is and while he has rapped about his past and his rise to fame, this was the first time such details were further explained. From growing up in the harsh Marcy projects to being inspired by Biggie, Jay Z didn't just want to be just another rapper from Brooklyn or just some project casualty, he wanted more. Decoded goes into his thought process from leaving his drug dealing past behind to become the mogul that he is now.
Posted by Salvatore Bono at 5:42 PM