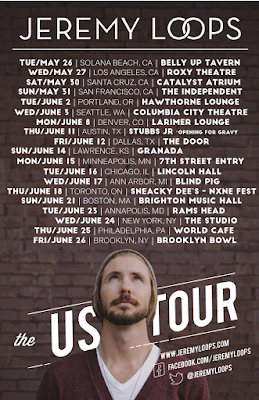 This week marked an extraordinary step in civil and human rights as same-sex marriage was legal in all of America. It also marked the 20th anniversary of what could be the most important sporting event of all time -- South Africa's surprise win when the hosted the Rugby World Cup in 1995. A year after Nelson Mandela was elected to office, Madiba found a way to unite his countrymen black and white through sport and by hosting the Rugby World Cup, which was predominately watched and loved by white South Africans during Apartheid, he closed the racial barrier and had everyone believe in their Springboks. While the anniversary was celebrated in all of South Africa this week, their latest export Cape Town musician and activist Jeremy Loops was in America concluding his massive U.S. tour and on the day same-sex couples were allowed to marry everywhere in America, he brought his tour to a close. It was a fitting end for someone who spreads the message of peace, love, harmony, and most of all, brotherhood.

Read Our Interview with Jeremy Loops


Blowing into his harmonica from the stairs above the Brooklyn Bowl stage, Loops came strutting down and walked on stage to a screaming audience while he beat boxed, played harmonica and looped it altogether to a dazzled crowd. As he began to sing and loop his voice into his pedals, many were wondering if he was going to have a full band play with him. Low and behold, after three songs musicians Sakitumi, Ben Brown, and Jamie Faull joined him along with Johannesburg rapper Motheo Moleko -- now it was time for the party to star. Loops combines folk, jazz, hip-hop, and even blue grass to get his unique and eclectic sound across and has a whole room doing a ho-down, stomping their feet and even line dancing at points to his music.

"This has been a very tough and very rewarding eight weeks," Loops told the audience halfway through his 40-minut set, "I had bronchitis last week, I was in the hospital, but I still had to perform. Coming on stage and seeing your faces gave me adrenaline and the show went on. Thank you. I couldn't think of a better way to finish this tour than here in Brooklyn," he said. He will release his debut album, Trading Change, in America this August and has seen his crowds get significantly larger than when he first arrived two years ago. It is clearly because of his talent but also how much he and his band give to the crowd during their gigs.

Closing his tour at Brooklyn Bowl on a Friday night was a fitting way to send off Loops and his talented band back home to Cape Town and enough to feel they made an accomplishment and a dent here in the U.S.
Posted by Salvatore Bono at 8:49 AM