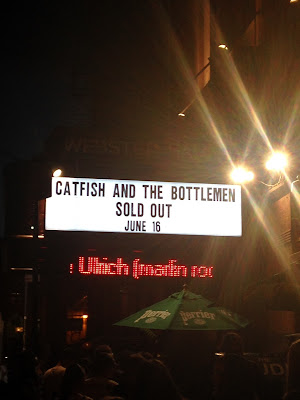 In what will be their last small New York City show for a long time, British sensations Catfish and The Bottlemen returned to Manhattan to perform at a sold-out Webster Hall just months after they played Bowery Ballroom earlier this year. The band, who released their debut in the UK and Europe last fall, struck the shores of the U.S. and the ears of listeners earlier this year when The Balcony was finally released here. For a band with such a bizarre name, they take the influences of 80's era Springsteen and mix it with The Killers, The Strokes, and Arctic Monkeys, to craft a catchy and enjoyable rock and roll sound that makes up for their title. 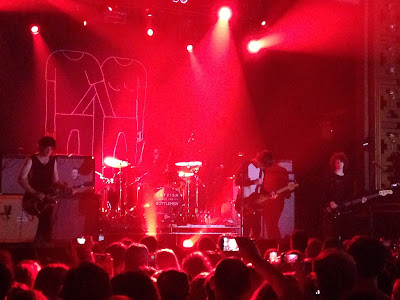 Arriving on stage just after 10pm, the band were greeted with a very loud New York welcome from the fans. Singer Van McCann's personality resembles that of a young Chris Martin, charismatic, humble, charming, and most of all not jaded just yet by the popularity of how big his band is getting -- this may change once McCann starts dating within the celebrity world. For now, the wide-eyed and bushy haired front man is all smiles and all heart as he gets to live out his dream with his mates. Opening with "Rango" and "Pacifier," the band played in front of a giant backdrop of The Balcony's cover and under the crimson lights of Webster Hall, this rock and roll show was one for the fans. Instead of doing what many do at gigs these days, chat, check their cell phones, the entire room was engaged, screaming the words back to the band and at points were louder than the musicians on stage. This of course made McCann and his friends want to play harder and better.

For the hour they were on stage, they tore through their album with the loudest applause coming from songs like "Kathleen, and "Homesick." It was their global smash single, "Cocoon," where McCann mentioned he wrote in New York City when they signed to Communion, the record label owned by Ben Lovett of Mumford & Sons. Of course that was the song that got the most love from the crowd, especially when they threw in a cover of Springsteen's "Dancing in the Dark" into it. Closing with "Tyrant," Catfish and the Bottlemen showed that they have the heart and will do be one of Britain's best rock bands and as their shows get bigger, they will prove it.

This was their final U.S. gig for a while as they return to Europe for summer festivals  but they will be back in the fall, apparently with a new record and when they return to New York it won't be the 800-person Webster Hall they will play, it will be the 3,000 person Terminal 5.
Posted by Salvatore Bono at 5:51 PM