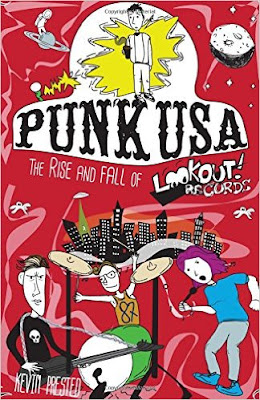 Lookout! Records were a record label that helped define the 80s and early 90s punk scene in California's Bay Area. Signing bands like Green Day, Operation Ivy, The Mr. T Experience among the many they had on their roster, they would craft a sound that would move a generation out of the grunge era and into something so much brighter but just as important. Author Kevin Prested captured the importance, rise and fall of Lookout! in his 2014 novel, Punk USA.

The book, which gives an account as to how founder Lawrence Livermore founded the label to fund his own band The Lookouts album sessions in 1987, to how he discovered Green Day and released their first two albums. By the mid 90s the band were bringing in more money than they could imagine until one day it all went away. It is a story of rock and roll behind the scenes of the sex and drugs and the business end of things that came crashing down. In an era when major labels struggle, this is a lesson they could learn.
Posted by Salvatore Bono at 6:19 PM