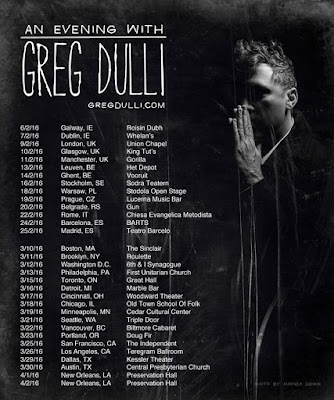 Since the late 1980s Greg Dulli has been making music and has proven himself as one of America's greatest lyricists and poets. From his work with The Afghan Whigs to The Twilight Singers to The Gutter Twins and his own solo material, the Ohio musician has lived and told it all. This year, while rumors of another solo record are in the air, Dulli took all of the material he has written and recorded and brought it on the road for a rare tour that featured hired guns and some of the backing musicians of The Afghan Whigs. Dubbed "An Evening With Greg Dulli," it made it's second North America stop in Brooklyn on Friday night at the intimate BAM affiliate - Roulette.

Taking the stage and opening with "If I Were Going" the sold-out crowd of near 700 cheered as if triple the amount of people were in the room. Dulli couldn't do anything but smile. The rush he must has felt to have that crowd make that type of noise straight away was indescribable. As they rolled right into "The Body" and then a cover of Bjork's "Hyperballad," which Dulli, like most of his covers, transformed and stripped from the original to make it its own folk-meets-Americana sound, the speakers began to crack and give out. As the roadie and tech, Larry, scrambled to fix the problem and bring on a new speaker, the band played on. "Hey, it's rock and roll," Dulli told the enthusiastic crowd. "We are going to go off script," at which point he took the piano and began playing songs that were not featured on any setlist. It was his show, it was his idea, no one could stop him.

In the near 115-minute set, Dulli took fans through a timeline of his music. Songs like "Too Tough to Die," "Summer's Kiss," "So Tight," "Demon in Profile," "My Funny Valentine," all took on new interpretations and meaning. As he strummed with just his acoustic guitar, it took some of the edge off the songs, which many did not feature a proper drummer, instead relied solely on the percussion of their strumming or stomping legs.

As 11p.m. hit, the unbelievable show came to an end and a humble Dulli thanked the people of the New York metro area for always supporting his work. He shared his gratitude by meeting fans after the show for photos and autographs. After getting an in-your-face look into his music, one thing was for sure, Dulli, who is one of America's greatest lyricists and poets is also one of musics most underrated.
Posted by Salvatore Bono at 9:29 AM