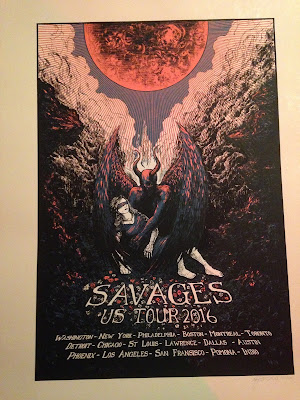 Fresh off a critically acclaimed European tour, London's Savages made their way across the pond and began their North American tour in Washington on Sunday before arriving in New York on Monday for two sold-out gigs across the city. 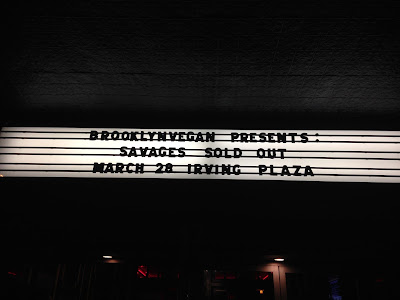 For their first gig, the female quartet performed at Irving Plaza on Monday night and brought an intensity that is so difficult to describe, it can only be experienced. The band, who are touring behind their fantastic sophomore LP, Adore Life, which they released in January, took the momentum they received in Europe and used it in New York. Opening with "I Am Here," the band set the mood straight away with their lighting and tone. As strobe lights were used for effect and sparse white lights were used minimally on stage, the band's dark but hopeful sound peaked through as they painted the room with their music. 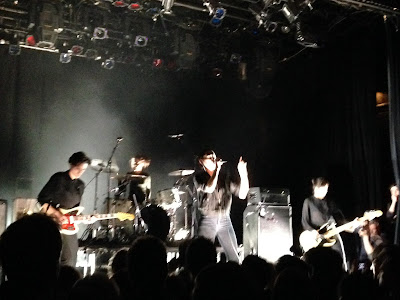 Savages, who are based in London, are so quintessentially European they could be from Paris, Berlin, Glasgow, Milan or even Madrid. Their sound is post-punk, post-hardcore, and no bullshit. They are just as much influenced by Joy Division as they are Fugazi, they are also just as much influenced by Depeche Mode as they are Sleater-Kinney. Taking their moody music to New York is as seemless as riding a subway, which explains the high demand whenever they come to Gotham. Singer Jehnny Beth, who is originally from France, is one of the most underrated frontwomen in music today. She commands the stage like a drill sergeant but also moves in such hypnotic fashion it is hard not to take your eyes off of her. Ripping through songs like "Sad Person," "City's Full," "Slowing Down the World" and "Shut Up," each and every single person in that room was so awe struck, it didn't matter that it was Monday night, they wanted more -- and you couldn't blame them. 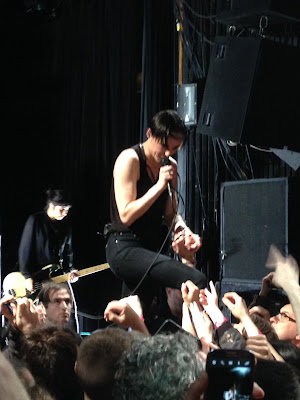 During the set, Beth would crowdsurf, stand on the hands of the audience as they would pull her out to the center of the room and climb the mountain of fans as all of Irving Plaza had their eyes (and phones) transfixed on what she would do next. In an era when girl power is rightfully more in the forefront than ever before, this was one lady with more chutzpah than most. As the band would raise the decibel levels as high as they could without sounding like garbage, Savages were feasting on their own powers. They may not look like it, but they clearly are having the time of their lives. 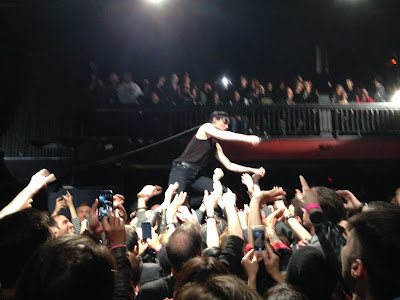 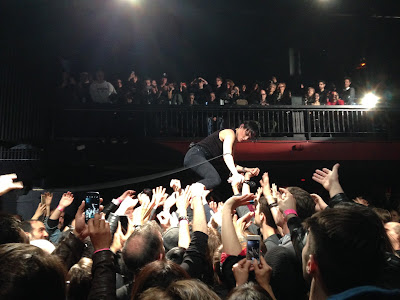 As they plowed through fan favorites like "The Answer," "T.I.W.Y.G.," "Hit Me," "Adore" and the closer, "Fuckers," Beth professed her love for the city and what it means to her and the band. "Last year we played nine shows here while we were making Adore Life, thank you for letting us test some of the early versions out," she said. The singer also thanked one fan, who was in attendance, that was at all nine gigs in 2015, "I am glad you are alive," she told him. The whole room was glad they came alive to witness what they did. 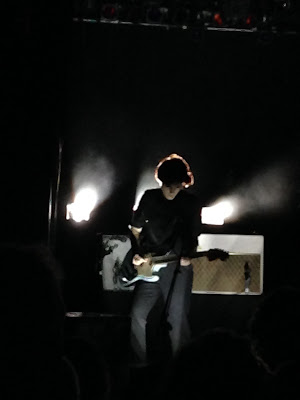 Posted by Salvatore Bono at 8:51 PM