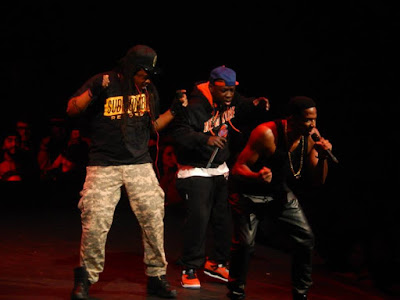 Very sad news to report, A Tribe Called Quest co-founder Phife Dawg has passed away at 45.

Born Malik Taylor, he battled a series of health issues over the years, including diabetes. He unerwent a kidney transplant in 2008, which was documented in the fantastic documentary -- Beats, Rhymes and Life: The Travels of A Tribe Called Quest.

The cause of Phife Dawg's passing has been released in a statement from his family.

They said: "We regret to share the news that on Tuesday March 22nd, 2016, Malik has passed away due to complications resulting from diabetes."


View: Live Pix of A Tribe Called Quest at Barclays Center in 2013

Known for his higher pitched vocals and funny but brilliant rhymes, Phife appeared on all of Tribe's records. In 2000, he released his solo debut, Ventilation: Da LP.

Tribe, which formed in 1985 in St. Albans, Queens, would go on and become one of the most acclaimed hip-hop groups of all time. The separated by the end of the 90s and had on-again, off-again reunions throughout the 21th century. Their final public concert was in 2013 when they opened for Kanye West at Madison Square Garden. Last year, the group made an appearance on The Tonight Show and have not performed since.

Phife's amager Dion Liverpool released a statement and said: "While I mourn the loss of my best friend and brother, I also will celebrate his incredible life and contribution to many people’s ears across the world. Even with all his success, I have never met a person as humble as he. He taught me that maintaining a positive attitude and outlook can conquer anything. Now my brother is resting in greatness. I’m honored to have crossed paths with him. Riddim Kidz 4eva."

Our thoughts are with his family, friends, and the Tribe.

Posted by Salvatore Bono at 6:55 AM