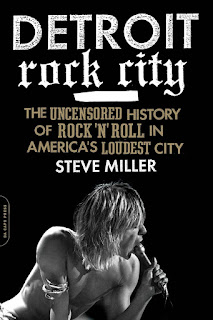 Detroit may be Motown but it is also a rock and roll city. Immortalized in the KISS song "Detroit Rock City," the Motor City has been one of America's loudest, fastest, grittiest and hard hitting cities. In recent times, Eminem's hometown has been a town in crisis but the once flourishing car making city has a deep root in rock and roll that has always shown the dark side of Detroit. In Steve Miller's 2013 book, Detroit Rock City, the author chronicles the city's music that matched its grit. From the sounds of Iggy Pop and The Stooges, The MC5, Bob Seger, Alice Cooper to the modern era of The White Stripes, The Romantics, Negative Approach, Detroit has been a town that likes its music as fast as its cars.

Listen To Our Essential Iggy Pop Playlist on Spotify

The book also demonstrates the rise and fall of rock and roll within the town and how it ties into the economy. Featuring interesting interviews with members of The Stooges, Jack White, Andrew W.K., they give further insight into the importance of the Motor City. Miller also looks at the influential venues like Grande Ballroom, Bookies Club 870, City Club, Gold Dollar and Magic Stick that gave a platform for their artists to play. What Please Kill Me is to New York, Detroit Rock City is to Detroit.
Posted by Salvatore Bono at 8:48 AM