For the first time since 2009, Jarvis Cocker will release new music. The former Pulp frontman will release Music From Likely Stories, an EP of songs from the British TV series Likely Stories. Take a look at the tracklisting, below:
01 Theme From “Likely Stories”
02 Foraging
03 Looking for the Girl
04 Poor Babe in the Woods

Former Verve frontman Richard Ashcroft has hinted in the past he would work with Noel Gallagher. Noel himself has claimed he would like to work with Ashcroft. Now, in a new interview with BBC 5 Radio, Ashcroft said he could not work with Noel because it would "upset" former Oasis frontman and Noel's brother, Liam. "[Brotherly love] is like a mafia thing, do you think I would [get in between] those two with a Noel/Ashcroft album and think of Liam festering, listening to it on the radio. I don't think so. I'd be really excited helping Liam… I think he should do his first solo album," Ashcroft said.

Following last year's covers with Howard the Duck and Deadpool doing the Run the Jewels gun and fist logo -- Black Panther will now feature a comic doing the same. The issue is out next moth, take a look: 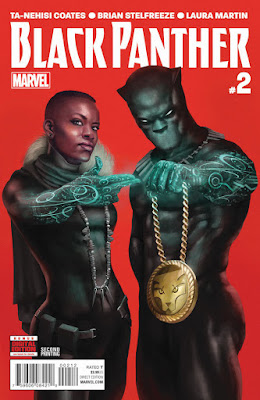 Posted by Salvatore Bono at 8:24 AM