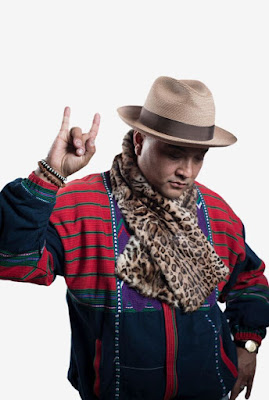 For over 20 years, Lyrics Born has been destroying mics with his own blend of alternative hip-hop. The rapper, who just released his greatest hits album, Now Look What You've Done, Lyrics Born, asked fans to pick the tracklisting for his first career-spanning project. While the compilation is not a farewell, it closes one point of his career as he begins to take his next steps toward the next. We spoke to Lyrics Born in early April right after the passing of Phife Dawg of A Tribe Called Quest and discussed the influence he had on the West Coast emcee. Take a look at our interview, below:

Hailing from Japan, it wasn't the breeding ground of hip-hop, who were some of your biggest influences?

We moved to the US when I was 3, so I didn't really have the opportunity to grow up there. Hearing rappers delight in Berkeley as a 2nd grader changed my life. As soon as I heard it I knew what kind of artist I wanted to be. It was like a "Road to Damascus" moment. Music was never the same for me or the world again.

Throughout your childhood you bounced around a lot and moved to various cities. Did the change of atmosphere influence your work?

The only 2 cities I remember living in were SLC & Berkeley. SLC was largely mono-cultural, & I remember being the only person of color in my grade. We were also quite poor as my single mother was a young college student at the time. It was a struggle. When we moved to Berkeley my whole world opened wide. We moved from a mono-cultural, ultra-conservative place to a mega-diverse, radical place.

Which place had the most influence on you?

I would say the Bay Area. It's diversity in thought, culture, politics, ideas... The weather is fantastic.

We asked Lyrics Born about the passing of Phife Dawg from A Tribe Called Quest and what they meant to him.

That was such a loss. As hip-hop fans of that era I think we'll be mourning him for quite some time. I knew he lived out here but we never crossed paths.  His music meant everything to me. Tribe is the most influential group of my career, alongside De La.

Aside from rapping, you are also a producer. Which do you prefer? How did you fall into getting behind the decks?

I don't produce as much as I used to. I found that when the music business began to contract, I needed to spend more time touring, so working w/producers afforded me time to perform more, & turnaround albums more efficiently. I've released 4 albums 2 EPs & 3 mixtapes in the past 6yrs. It's been intense.

Are you working with any artists as we speak?

Yes, but that's secret for now.

You released your latest studio album last year and return this year with a compilation. What was it like picking out what songs would go on your "Best Of?"

I didn't choose, the fans did. As they always have. I write & record the songs, but they're the people that make them "hits".  The tracklist was largely determined by fan feedback on my social media. They don't lie. What they say, goes!

Which songs of yours do you feel fully define who you are?

No one song can do that. They're all snapshots of a certain moment in time, expressing a very specific emotion, experience, situation or point of view. I think my entire body of work & career can best illuminate my artistic legacy, but even that is just a piece of who we are. Our LIFE legacy is what truly defines us. What we've accomplished in our LIVES, & not just what we did while we were at work.

In 2011, you famously said that you had no made your best album. Five years later, does that still hold true?

Yeah, I did say that, but I don't even view my career like that anymore. Releasing a Greatest Hits has changed everything for me. I realize now, it's not about any one song or album, it's about the overall spectrum of quality & impact of one's body of work & artistic legacy that matter now.

What is next for you?