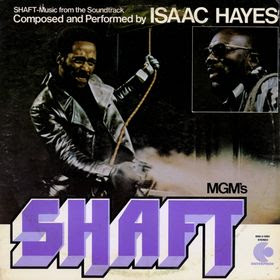 During the "Golden Age of Cinema" of the 1970s, one film exploded onto the scene that brought the noise and funk to the masses -- Shaft. The 1971 picture has been hailed by the Library of Congress as "culturally, historically, or aesthetically significant." While the film helped bring blaxplotation to the mainstream, the soundtrack made R&B hitmaker Isaac Hayes a legend. The double album and score to the film is widely regarded as one of the best albums of that decade and one of the greatest soundtracks of all time.

The soundtrack became the first double R&B album released by an artist and it's theme song, "Theme from Shaft," spent 14 weeks on the charts. The soundtrack, just as gritty and funky as the film it accompanies, helped break down racial barriers in a dominant white Hollywood. Over 40 years later, the sad state is the same fight is currently taking place.
Posted by Salvatore Bono at 9:00 AM