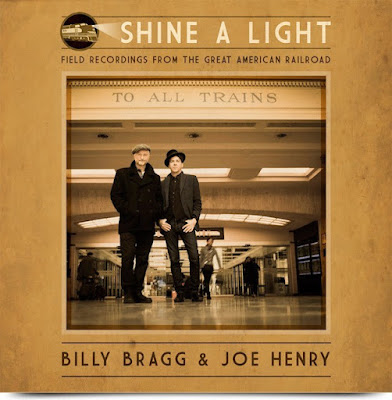 Earlier this year, musicians Billy Bragg and Joe Henry took a railway trip from Chicago to Los Angels and made a record in the process.

The album, Shine A Light: Field Recordings From The Great American Railway, will be out in September.

In a press release, Bragg said: "Railroad songs provided the bedrock of American popular music, from Jimmie Rodgers, the Singing Brakeman, to Lead Belly, whose repertoire provided several of the songs for this project. In my country, Lonnie Donegan’s 1956 hit ‘Rock Island Line’ sparked the skiffle craze, inspiring a generation of British teens to pick up guitars and form the groups that invaded America in the 60s, from the Beatles to Led Zeppelin. Growing up in the UK, I’d always been aware of this tradition but when I traveled to the US, I was surprised to find how few people look to the railroad as a means of transport. With this project, we wanted to explore the transformative power that the coming of the railroad had on the lives of ordinary people by taking these songs back to the places that inspired their creation. Traveling on the train and recording the songs as we went allowed us to both visit places that were important 125 years ago when the lines were laid, but to also explore the viability of the railroad as a means of transport in the 21st century."

The songs, all covers, were recorded live at the stations.