Great Soundtracks: 'Above the Rim' 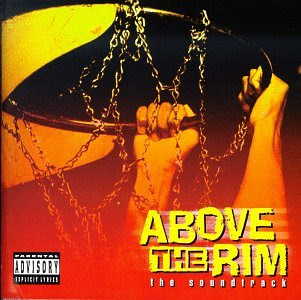 By the time the mid 90s rolled around, Hollywood realized they could cash in on hip-hop. Thanks to films like Boyz N The Hood, Menace to Society, Juice and Deep Cover, street stories didn't just make it to wax but to the silver screen. By 1994, a month before Nas would release the gospel, Illmatic, the mid 90s and now classic hip-hop sound to that point was captured on the soundtrack to Above the Rim.

Listen To Our Essential Tupac Playlist on Spotify

The film, which featured music from Tupac, who also starred in the movie, had an impressive roster of emcees and voices. From The Dogg Pound, Snoop Dogg, SWV, The Lady of Rage, Dr. Dre who lent songs to the picture, none broke out more than Warren G. and Nate Dogg's "Regulate." The song would go on to become an instant classic and bring Nate Dogg into the foray of hook givers for decades. Above the Rim would go on to box office gold but 22 years later, it is the soundtrack that settles the score.
Posted by Salvatore Bono at 5:31 PM