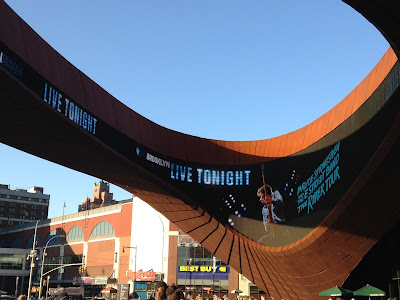 Every concert Bruce Springsteen puts on is a special occasion. It is one of the reasons why he is The Boss. However, on Saturday night inside Brooklyn’s Barclays Center, he even outdid himself. He showed that age was not a factor for his tour-de-force three-and-a-half hour performance that will go down in the history books for Bruce fans.

As the stark stage was painted from the rays of purple lights, Bruce Springsteen and the E-Street Band came out on stage to thunderous applause. Without any introduction, opening act or greeting, they took their places and broke out into a very special version of Prince’s “Purple Rain.” It was their first concert since the passing of Prince on Thursday.  It was also the first time the band has ever covered the song live.


As the song ended and the lights slowly began to shift colors, each member of the band, including Springsteen, was wearing a purple item in tribute to the late singer.

It was then into business as usual for the group. The current tour, which began in January, is celebrating the 35th anniversary of his landmark album, The River. Saturday night’s gig was the second to last on his four-month trek across North America. The tour will end on Monday in Brooklyn before they head to Europe for the summer.

After performing “Meet Me in the City,” in front of the sold-out crowd that included famous faces like Stephen Colbert, Katie Couric, Ralph Macchio, and The Boss’ biggest fan – his mom, Springsteen talked about what The River is and what it meant to him.

He said the record was about him reflecting on wanting to be a man and become a father, husband and a profession that paid. Yet, being a rockstar it proved to be a dilemma, however, he knew many of the characters that he wrote about who influenced the record and the shift we all go through from leaving our 20s to our 30s and facing reality that it is time to grow up.

The River is as complex as it is long.  He addressed that “I tried finding things to make it about life but also an E-Street record.”

As his diatribe came to an end, he dedicated the night’s show to Prince, calling the musician “one of the greatest performers I have ever seen… Every time I saw him, he left me humbled.”

Read Our Tribute to Prince: Remembering The Purple One

Once the speech concluded, he took us to The River.

Playing the record from front to back, he made the songs come alive and show cased why the anniversary of this record is so important and why this album is still so poignant. 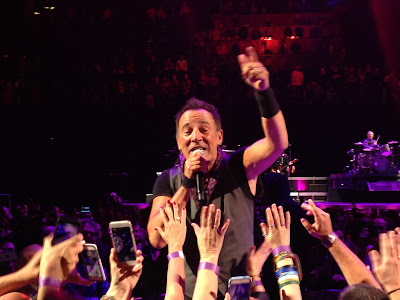 Almost 90-minutes later, the journey through The River was complete. Playing a record from front to back is a complicated task for any artist, but to do it for an album that long can be a monster. However, for this well-oiled machine, it was another day in the office.

Anyone who has laid eyes on E-Street since the start knows what they can do -- Nils Lofgren’s brilliant guitar work, Little Steven Van Zandt’s outfit and showmanship that was backed by the impeccable rhythm section of Max Weinberg on drums and Gary Tallent on bass, the band cooked. As Roy “The Professor” Bittan tickled the ivories and Charles Giordano made his presence heard from his organ and Soozie Tyrell’s unique voice and violin work added to the flair the men’s club. While Jake Clemons, nephew to the late Clarence, is the youngest member of the band, he shows he can keep up with the elder statesmen and women of rock and roll.  Noticeably absent was Springsteen’s wife, Patti Scialfa, no word as to what caused her to miss the show, but it went on.

Following the lengthy trip down The River, it was time for Springsteen and the heart-stopping, pants-dropping, house-rocking, earth-quaking, booty-shaking, Viagra-taking, love-making – Le-gen-dary E – Street – Band to give the crowd some hits.

Barnstorming from the record to an epic performance of “Bandlands,” “No Surrender,” “The Promised Land,” “Backstreets,” “Because the Night” and new classics like “Lonesome Day” and “The Rising,” Springsteen entered the crowd, touched hands, blew kisses and refused to stop. 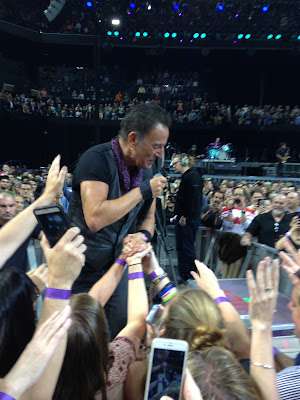 After a moving version of “Thunder Road,” many expected them to retreat to the wings and catch their breath. Instead they kept on truckin.’ They deserved the break but pushed on. The 66-year-old singer tired out a crowd that was half his age.

As the houselights came on, “Born to Run” blared through the speakers and the party did not stop as “Dancing in the Dark,” “Rosalita,” “10th Ave. Freeze Out” and “Shout” closed the night.

Seeing this performance is awe-inspiring. If you looked around you saw generations of fans – fathers and sons, grandmothers and granddaughters, groups of friends from every age group gathering together under one roof to see a hero that proved age is just a number. 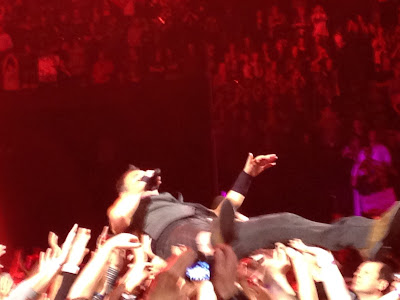 Posted by Salvatore Bono at 8:44 AM