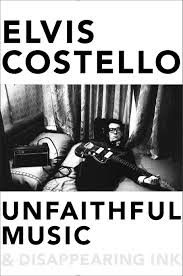 Elvis Costello has made a career being a witty, sly and cunning lyricist, so, it should come as no surprise that his book writing is the same. Last year, the rock and roll icon and king of the nerds released his autobiography Unfaithful Music and Disappearing Ink. The book, chronicles his life as he grew up between London and Liverpool and had the sounds of his grandfather's trumpet blairing at all times. Yet, the man who was born Declan Patrick McManus did not think he would be a rockstar.

The theme of this book and his life was dumb luck. This is not a tale of sex and drugs and rock and roll, though that is in there, it is more about how things just sort of happened unexpectedly for the man. He chronicles his work with Paul McCartney, The Roots, David Bowie, T Bone Burnett, among others, as well as his experiences / encounters with The Clash, Tony Bennett, The Specials, Van Morrison, and Aretha Franklin.

He gives us vivid insight as to what it is like being a fly on the wall and buzzing around in your own way.
Posted by Salvatore Bono at 5:18 PM