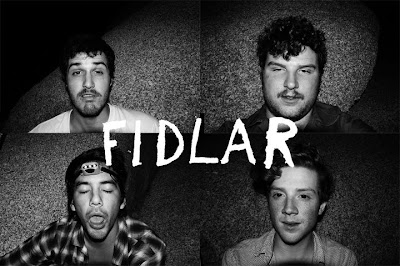 "Fuck It Dog Life's A Risk," that is the motto and the words behind the acronym that make up the band name, FIDLAR. FIDLAR are an L.A. thrash, punk, garage rock band that have been making waves since 2011 and after becoming one of the biggest buzz bands of 2012, the band finally released their self-titled debut last month to much acclaim. The band embrace a slacker, skater lifestyle and have no problem making awesome music to accompany their ideals. Take a look at our interview with drummer Max Kuehn below:


The name of the band is an acronym for “Fuck It Dog Lifes A Risk,” is this a phrase you all went around saying or something you came up with?

A few skater friends came up with the phrase. It was being said for a bit before the band.

Did you think forming this band would be a risk?

You have been called “Skate Punk,” Slacker Punk,” “Garage Rock,” all these terms. What do you consider FIDLAR?

I think we consider ourselves just a rock band. Styles change from song to song.

While the spotlight for many bands these days is on Brooklyn and the NYC area, what is it like to be an LA band now with the East Coast getting so much attention?

I guess it feels cool? There are a bunch of really good up and coming bands from LA, so keep and eye out.

How has LA influenced who you are as a band?
The music from out here has definitely influenced the band a bunch. We all like a lot of LA punk. And even just the fact that we met and started in a studio is something that is more likely to happen in a place like LA.

For someone that doesn’t know, what is the scene out there like?
Super tight. There a bunch of really sick people and really good bands.

This year had to be very special for you, the band was well received and began getting really noticed and you were featured at Lollapalooza among other festivals. How do you top all of this in 2013?
Just touring a bunch and playing new places.

Being a buzz band or a radar band, are there any pressures put on you to live up to the hype?
I don't think so. The only real difference in our show is that we've gotten tighter  because we are playing all the time.

After going and playing small clubs and playing in your garage, what was it like entering a recording studio for the first time?
We actually recorder our record at our house so we didn't really have the full studio experience. Zac and Elvis actually both used to work at a studio, and the band formed in the studio.

You are releasing your debut via Mom & Pop, what was it like signing with them?
Really great! They are super awesome and they let us do what we want.

It was super rad. We did it at Zac and Brandon's house so we had some time to fuck around.

FIDLAR has seemed to lay down their own set of rules and will not bend for anyone, which is awesome. Was this a theory from the get-go or did you not want to get swallowed up in the media and things surrounding indie bands these days?
We kinda always just do what we want and what's fun. It's important for us to have a say in everything.

Playing so many fucking shows. It's going to be sickkkkkk
Posted by Salvatore Bono at 8:24 AM