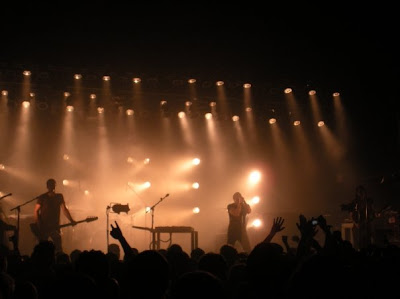 Photo by THE CREATURE

In 2009 Trent Reznor shocked the music world when he said Nine Inch Nails would no longer be a touring band, the band [Reznor] would still make music under NIN. In the summer of 2009, NIN embarked on massive "Wave Goodbye" tour that took them around the U.S. on one leg in a co-headlining venture with Jane's Addiction called NIN/JA. It also saw them make summer festival appearances including Bonnaroo, then took NIN/JA to Europe, where the band would then come back and stage a series of swan song gigs in intimate clubs in New York City, Toronto, Chicago, and Los Angeles. The tickets to those gigs were, as one could imagine, the hottest tickets in town and was a way for true fans of the band to say goodbye.

In the years apart from Nine Inch Nails, Reznor famously won an Oscar for his score for The Social Network, and scored The Girl with the Dragon Tattoo. Reznor, along with his wife and co-Oscar winning composer Atticus Ross and longtime NIN collaborator Rob Sheridan formed How to Destroy Angels, that band is set to release their debut, Welcome Oblivion, next month.

Now, Reznor has shocked the music world again with the announcement that Nine Inch Nails will tour in 2013 and extensively into 2014. He is bringing along a new line-up of NIN members, notebly including longtime NIN collaborator Alesandro Cortini, former Jane's Addiction bassist Eric Avery, Telefon Tel Aviv's Josh Eustis, and King Crimson's Adrian Belew.  Already there is speculation that the band will be playing Lollapalooza in Chicago.

I was working with Adrian Belew on some musical ideas, which led to some discussion on performing, which led to some beard-scratching, which (many steps later) led to the decision to re-think the idea of what Nine Inch Nails could be, and the idea of playing a show. Calls were made to some friends, lots of new ideas were discussed, and a show was booked - which led to another, which somehow led to a lot of shows.

The band is reinventing itself from scratch and will be comprised of Eric Avery, Adrian Belew, Alessandro Cortini, Josh Eustis, Ilan Rubin, and me. The first shows will begin this summer, followed by a full-on arena tour of the US this fall, and lots of other dates worldwide to follow through 2014.

Lots of details and dates to come. See you soon.