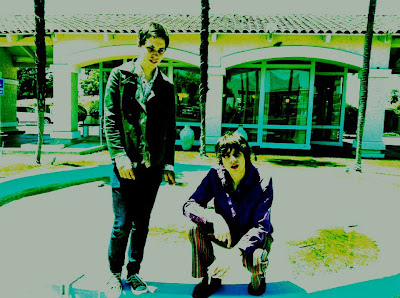 It is hard to imagine we are doing a Rising Artist post about a band who are already on their second record. California's Foxygen formed in 2005 and after releasing a slew of EP's and their debut, Take The Kids Off Broadway last year, the band caught our attention with their latest release, We Are the 21st Century Ambassadors of Peace and Magic, which arrived last month. Signing to beloved indie label Jagjaguawar, Foxygen have begun carving a name for themselves. The band comprised of Jonathan Rado and Sam France, are the first band since Portugal. The Man to create mind blowing psychedelica and fuse it with 60's British guitar rock. Thanks to having an early release and so far, the best record of the year, Foxygen are poised to have a massive 2013 and after hearing We Are The 21st Century Ambassadors of Peace and Magic you will understand why.
Posted by Salvatore Bono at 7:38 AM