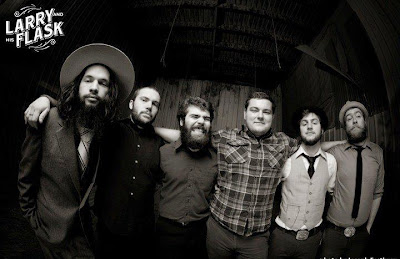 There are very few bands out today that could match up to the amount of energy and high velocity fun that Oregon's Larry and His Flask create on stage. The band, which is a folk-punk band that combines elements of blue grass and Americana and kicks it into high gear with a punk sound have been getting audiences around America moving like they never thought they could. After a successful 2012 touring around the country and linking up with Frank Turner and Jenny Owen Youngs and performing at Riot Fest, Larry and His Flask became one of the most talked about live bands around. As the band works on new material, we spoke to singer and guitarist Ian Cook to find out more about Larry and His Flask. Take a look at our interview below:

First off, nobody in the band is Larry, where does the name come from?

Larry was born on a frigid hollows eve in the year 2003. It was kind of an alter ego our drummer Jamin created for himself. Don't ask me why we stuck with the name, it just happened and here we are now!

What is more important – Larry or his flask?

Definitely the flask!! And whatever may be inside of it!

This band combines together so many different styles and sounds, how did you figure out this was the music you would be playing?

The sound was simply born out of taking six dudes and throwing all their influences together and seeing what happened. We all grew up with punk rock and the local scene really inspired us to start playing. We never really planned our sound, it just kind of naturally came out. The only thing I would say was conscious was our energy. We knew we wanted to throw everything we had at the crowd every night. But other than that, it's still a crapshoot every time we sit down and work on something new. Which keeps everything really fresh and fun.

With so many of you, how did the band come about?

Larry and his flask started, like I said back in '03 with our bassist Jesse, our drummer Jamin and another guitarist who is no longer in the band. Shortly after the inception I joined. We were pretty much just a shitty local punk rock band playing the local scene every weekend. But things progressed and we lost members, gained members then lost members again until we just said "fuck it!" And went totally acoustic, adding as many members as possible(at one time we had 11 or 12 members!!) and took it on the road. The members you see today is what the lineup got whittled down to and we're still goin' strong!

Oregon has been giving the music world a plethora of good bands over the last 5-7 years, where does Larry and His Flask fit into that?

Nowhere! Haha. I'm kidding. We're from a couple of pretty small towns in the middle of nowhere. Bend and Redmond. For a long time we kind of avoided Portland due to its over-saturated scene. We focused on the places like we came from. Small towns that deserve to have a music scene. Don't get me wrong, we love Portland, but with so many bands, it was hard to make a splash if you know what I mean. Now it's much different. We just go fucking EVERYWHERE!! But as far as being from Oregon is concerned, we're proud of that.

Your live shows are simply amazing. When you get off stage each night, how exhausted are you or does the adrenaline never wear off?

The adrenaline does wear off eventually. Exhaustion does catch up with us. We're not super-human, We're just always down to party!!

Are you really having as much fun on stage as you show off or is this another day in the office for you?

We're grateful for everyday that we can spend doing what we love. How could we not be having fun?

After four albums and two EP’s, you are still a new band to most people. Do you consider yourself to be a “new” band now?

Relatively. We kind of feel new still. We're still winning people over every night. When it gets to a point when we're not trying to do that constantly I think we might not feel as new. But on the other hand, with every album you kind of feel new in a way. Showing people new songs takes the same attitude.

Is a new full-length in the works?

We're always working on new songs! We have almost a whole albums worth of songs for the next one. We're hitting the studio in January to pound it all out. We're all pretty excited about the new stuff. It's a little different but still very Flask. Can't wait to record it!!

Recently your toured with Frank Turner and Jenny Owen Youngs, at the final show of the tour, all of you were praising each other and banding together like a family. What was it like being on the road with all of them?

AMAZING! We all dubbed it the "Friendship Tour". I can't say enough good things about Frank and the Sleeping Souls and Jenny. Lets just say we all made some lifetime friends on that tour.

When I first reviewed you guys, I said “The band, which there is only one to describe is if one things of Mumford and Sons taking a ton of HGH and then doing massive lines of Coke and going on stage, that in a nutshell, is Larry and His Flask.” Do you agree with that assessment?

Ha, I guess. People have described us in so many different ways. Some of them massively in-depth and intricate like yours(some more so). But the most common reaction to what we do is the word " Ridiculous!". Which I like. It's simple, and it's so loaded. It's open for so many interpretations. But I guess I'd say our show is a lot like 6 guys getting up on stage and loving what they do!
Posted by Salvatore Bono at 9:12 AM