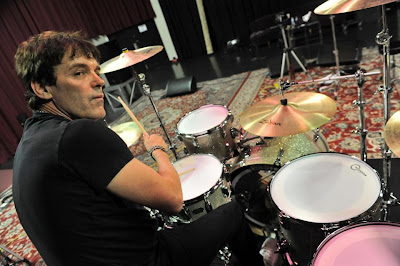 As Joey Ramone's personal items hit the auction block and months after his posthumous solo record and Johnny Ramone's autobiography was posthumously released, The Ramones still manage to make fans beg for more nearly 17 years after their final concert and famous break-up. While the band had a revolving door of musicians pass through their "Happy Family," one in particular struck a chord with listeners and critics and that was drummer Richie Ramone. Richie, who replaced Marky Ramone in 1982, played with the iconic Queens punks for nearly five years. Richie, would famously left the band after Johnny refused to pay him royalties and split merchandise sales evenly with him is speaking out. While his time with The Ramones was brief, it was memorable, now, he is a solo artist traveling the world as Richie Ramone and is an active composure and instrumentalist. We caught up with Richie to see how he is doing and what he is up to. Take a look at our interview with Richie below:

You were part of The Ramones for four years and the late Dee Dee and Joey Ramone praise you for saving the band, how does that make you feel?

More like 5 years...83-87. It is always flattering to hear beautiful words spoken about you. The reality is, I have a very aggressive drum style so it was like a shot in the arm. I think the band came together with new air to breathe and put out a great album, Too Tough To Die .

How did you get involved with playing with them?

One afternoon I was hanging out at the Shirts house in Brooklyn and Matt (Ramones Tech) said he had to split because the Ramones were auditioning drummers. I asked him to get me an audition and a week later Monte Melnick,"The Road Cat" called me and asked me to come down. The rest is history.

By the time you came on board they were a well oiled touring machine, what was the work ethic like?

Where you a fan of the band when you joined them or did you look at this as a good job and some work?

You never really look at being an artist as work because it just doesn't sound right. As far as being a fan, there was no poster on my wall but there were no posters on my wall of any band. My musical background was very wide and I just had no room. Once I was in the band, I focused on their sound and took with me all I had listened to in the past. They changed my life.

What was it like being on the road with The Ramones?

Like any touring band back then, you could be away from home for 2 months. It gets very grueling at times and the stress piles on. For the most part we had a blast on the road and the best part is the band gets super tight. Up all night, sleep all day, blah..blah...blah.

You were the first Ramone to be the sole composure of a Ramones song. How did that sit with Johnny and who presented him with the idea?

Joey and Dee Dee would always encourage me to write songs. So when we recorded Too Tough To Die, I was able to get a song on the record. Johnny would limit me to one song on each record till Halfway to Sanity because he would not get any writer's royalty on that song.

Have you read Johnny’s autobiography, Commando?

Recently you contributed to Joey’s posthumous release, …Ya Know, what was it like to be apart of that project?

It is always great to hear Joey's voice because he makes you feel good about yourself. I played on 5 tracks and did the record the day after the Joey Bash in New York City in 2010. It made me proud to be a part of that record and hopefully Joey liked my playing. We love you Joey.

Mickey Leigh called me and asked if I wanted to play on it ya know.

What are you working on these days?

I will be on tour for most of 2013 so Richie Ramone will be coming to a city near you. Also, I have the Richie Ramone signature model line of Mosrite guitars out now. They play really great and it is exciting to be part of the Mosrite family. Dana Moseley builds each guitar by hand in Bakersfield California.

You have been playing with your own band and fronting them?

Ben Wah Reagan, one of my guitarist's, plays drums also so we can switch it up live. That way I can get out front and mingle with the crowd. We have played a few shows and the band sounds incredible. Can't wait to do a world tour when the record comes out.

You seemed to be one of the few members of The Ramones that stuck by Joeys biological brother, Mickey’s side, when things got a bit hairy for him after Joey passed away. What is you relationship like with Mickey now?

Mickey and I are friends for life. We have known each other for so long, that he is like a brother to me. A good musician too!

You recently got together with CJ Ramone for the first time and played with him. What was that like?

How did that come about? It was really cool to meet CJ for the first time in Nashville. Our bands both played the Mosrite Guitar 60th Anniversary party and we hopped onstage together for a song. A really nice guy and a pleasure to meet. I would really like to do a show with him sometime. That would be pretty special.

What is your greatest memory about playing with The Ramones?

There is not enough paper for that question, but to be Richie Ramone in a band with all that legacy is priceless. I was in the right place at the right time and made history. A family always has fights and blood spatter, but through it all, we killed it and played some really amazing shows.

After all these years, why are The Ramones more popular now than ever?

The music is timeless and we were the real deal. The fans were number one to us and they drove the bus. I guess after all these years they are still behind the wheel and not slowing down. Peace out.
Posted by Salvatore Bono at 2:02 PM