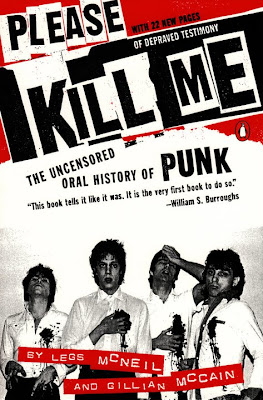 While Punk Magazine gets a coffee table book retrospect and we posted our interview with Richie Ramone of The Ramones, and The Bowery of New York City transforms as fast as the people move, the time, the places, and the people that made punk and the scene what it was will forever be captured in Please Kill Me. Released in 1997, the uncensored oral history of punk by Legs McNeil and Gillian McCain bring readers into the world of Detroit and New York City in the 1970's and the grime and disturbia that people were facing and going through in two of our major cities that brought out what we know as punk rock. With interviews from members of The Ramones, Television, Iggy Pop, MC5, Talking Heads, Blondie, Malcolm McLaren, The Clash, Sex Pistols, and those involved in Andy Warhol's factory, it tells  first hand account of what it was like forming a new genre of music in a time when it was hard to get major radio airplay and labels attentions.

While I can go on and review the book and talk about it for hours, bottom line is that this is one of the greatest books ever written and the definitive book on the birth of American punk told by the people that gave birth to a genre we love so much. It is the punk rock Bible. The book takes listeners through nearly three decades of music history and tells the wild stories behind some of music's classic tracks like "53rd and 3rd," "Rapture," "I Wanna Be Your Dog," and more. It even dishes into some of the gossip from back in the day like who Debbie Harry was sleeping with, what the CBGB's and Max's Kansas City scene was like before ending in the twilight years of Warhol's Factory and the Chelsea Hotel. This is a must read for any music fan.
Posted by Salvatore Bono at 5:14 PM