Lana Del Rey has confirmed she will release her new album, Honeymoon, next month.

Bloc Party are hard at work on their fifth album with a new line-up leaving Kele Okereke and Russell Lissack as the only original members. Okereke told news.au.com: "The range of the songs is quite extreme and quite diverse. In terms of an overall aesthetic, it definitely feels like we’ve moved into a different place in terms of recording and arranging. It’s us but it feels like it’s us in a way that we haven’t ever been before. It’s been very interesting watching Russell play the guitar, he’s using his instrument in a way I’ve never seen anyone use it. He’s always had a mind for effects and gadgets and whatnot, but with this record he’s taking his playing off the fretboard and it’s something else. I’m excited to get in front of people. When we go in and listen to the new songs they feel like they’re coming from a different place. That’s a good feeling to have."

Speaking to Shortlist, Kendrick Lamar has said he is going to take a stand against LA gang violence, saying: "That's a lot of responsibility. I definitely think that God put something in me that I'm not even aware of, I know it's there and I know it has the power to not only conquer what's going on in LA, but also a little deeper and further than that. I just don't know when.''

Billboard is reporting that Danger Mouse is working with Adele on her long awaited third album and Red Hot Chili Peppers for their latest venture. No release has been set for either but both records were expected to arrive this year.

This fall, Squeeze will release their first album of new material in 17 years, Cradle to the Grave. Take a look at the cover, below: 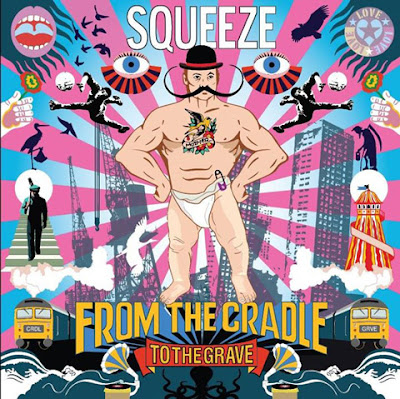