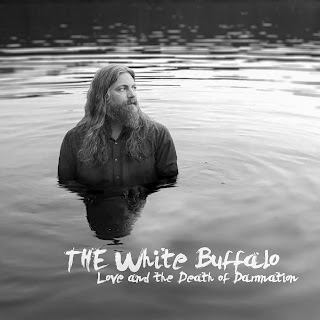 When Sons of Anarchy took its final ride last fall, they went out with a song that perfectly captured the spirit of the characters and as Jax Teller reconciled with the fate he had chosen, the vocals of Jake Smith were played. Smith aka The White Buffalo, has been captivating audiences long before SoA went off into the sunset and is making his mark again with his brooding vocals, deep and heavy lyrics with his latest record, Love and the Death of Damnation. The record, which is another personal journey for Smith, hears the singer / songwriter branching out and finding more about himself both as a person and as an artist. We spoke to him about the new album, having his work become a part of pop culture, and his life on the road. Take a look, below:

The new album is titled "Love and the Death of Damnation," what does that mean to you personally and musically?

I wanted a title that had elements of the album in it but with broader strokes.  There's some love, some spirituality explored in this album as well as the idea of heaven and hell.

This is your fifth record, what did you do differently on this record that you haven't done before?

There are a few tracks that I kept feeling and sounding good.  I didn't take them to a darker place, which has taken me awhile as a songwriter to feel comfortable doing.  Musically it's more varied groove wise than anything I've ever done.  There are some swampy jams, there's even a gospel song

Many of your records are concept albums, is this record?

No, but the very first song on the album I wrote while writing my last album.  It's a bit of a continuation from the last album I guess you could say, like a bookend. This one's just songs though for the most part.

Hailing from Southern California, how has your location influenced your music?

Landscape, weather, everything manages to seep their way into songs just like it does your life.

Last fall, you were part of TV history singing "Come Join the Murder" on the finale of Sons of Anarchy. The song was written by series creator Kurt Sutter, what was it like singing lyrics written by someone else that wasn't a cover and being a part of that important moment?

It was actually co written with Bob Thiele and I as well but the lyrics were primarily written by Kurt.  It was a unique experience as far as singing somebody else's lyrics.  It was a bit harder to feel it but it was definitely emotional.  It took me awhile to get it, the word play of "Come Join the Murder". He actually wrote those lyrics without the intent of it being the finale episodes song.  It was for an earlier episode but he loved it so much that he decided to use it as the finale.

Other songs of yours were also used in SOA, were you a fan of the show when you let the songs in the show?

No, I had actually never watched it until I got a song in it.  Then I got hooked and became a diehard!

Yeah, absolutely.  Probably SOA more than any other show just due to the fact that the way they used music was so in your face.  With the montage scenes, they  really made it apart of the story and not just background fluff. Having so many songs has also helped guide people to the rest of my catalogue

Last year you toured with Chuck Ragan, did you guys ever consider recording together?

We never actually talked about it but it would be fun! He would sit in with us every night and sing, he's got a great, powerful voice.

While I am sure you have gotten this before, why did you opt to go under the moniker 'The White Buffalo' instead of using your birth name? Did you take the name from the Charles Bronson film?

Can't sell T-shirts with the name Jake Smith on it!  The idea was that The White Buffalo would be a bit more grand than just a  singer songwriter project.  Could be a solo artist, a full band, trio, etc. It adds a bit of mystique as well.

A majority of your songs are very dark, deep, and come from intense places. What is it like bringing them to life night after night on stage and playing them again? Is it a cathartic experience for you?

I try to feel the lyrics every night but it's not exactly cathartic.  In the performance, I'm trying to be passionate and think about what I'm saying which definitely gets me to a good place.

Following the release of the record, you will hit the road, what are the essentials that you bring when touring?

Everything you need is in your iPhone nowadays...  E mail, notes, contacts, I can record and lay down song ideas too.  That's really all you need…. And a tooth brush
Posted by Salvatore Bono at 12:42 PM