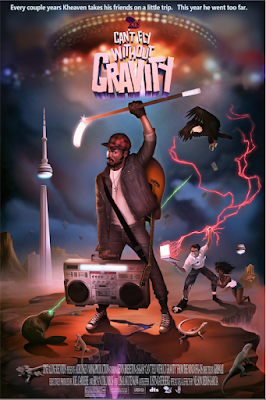 Toronto's hip-hop scene scene is the center of attention these days thanks to Drake and The Weeknd. Before those cats made the Canadian city a hip-hop epicenter, rapper K-Os (short of Knowledge of Self) was doing it long before Drake was even on Degrassi. With his new album, Can't Fly Without Gravity, out this month, K-Os is looking to stake his claim as the Godfather of Toronto rap. We spoke to the artist about his new album, his philosophies on music, and his legacy. Take a look at our interview below:

Hailing from Toronto, how has the city influenced your work?

Sometimes when Gazelles have to cross a river where there are crocodiles awaiting to feed. They all stand at the river's bank waiting for one Gazelle to start running across. You can see how they start kicking up water in anticipation of this crucial crossing a crossing that could take their lives. These animals are afraid because the first one to cross the river is the easiest target. Making musical art and trying to push the envelope has that same lonely element of danger!

Essentially I am a crooner and singer at my core so I always viewed Rap or Hip Hop as something to play and experiment with not something to make money off of. I always wanted to be the first to jump in the proverbial 'crocodile river’ despite risking not really  'blowing up' to a level of social distortion.  Toronto and the people in this city let me be me … and they appreciated my work

Regardless of the fact that the music I make lacks a blatant or desperate vie for pop stardom. I am thankful for that civic pride and grace.

The city has spawned popular hip-hop stars like Drake and The Weeknd, but you came first. Do you feel you paved the way for them to come through?

As a wise man once said : 'I plant the seed but Apollos (GOD) makes it grow.’ I plant seeds this is simply - just my job.The Universe and timing does the rest.

However… I mostly feel like a proud Daddy watching my sons use my genetics and DNA to try to conquer the world, its an unprecedented feeling.

Your musical style has never been about one thing and what makes you unique is that you drift into different genres, and ideas. Where does the inspiration come from?

From the fact that there a million and more ways to look at life and any living situation AND also because my biggest fear is getting caught in a specific paradigm or looking at life like 'Kevin' as opposed to looking at life with the virgin eyes of a child. I think over the next 50 years the human race will realize that we are multidimensional beings and when we do. When that day comes ALL the 'isms' will be smashed into bits leaving not one iota of prejudice left to conjure hate and bigotry. I hope I am around to see that day.

Many writers found it hard to pigeon hole you because of how unique your music is. How do you define your sound? Do we still need classifications in 2015?

My style is no style because I am not planned and yet .. it seems I've planned that to be said about me.

Tell us about your new record, what did you do here that you hadn't done before?

Denzel remains my hero of heroes and as an artist he almost always makes the right choices. The song bearing his name sounded like his persona to me and maybe the music that would be played as he got out of a limo at a black awards ceremony in 1991 or 1942.

Boys II Men -- All the emcees on this track -- Saukrates, Kardinal Offishall, Choclair, King Reign and Shad I knew them as boys as they knew me as one and now we are all men.  We all grew up in Hip Hop together and here we are alive and kicking it .. and growing stronger as artists. This is my DreamTeam supergroup called "The TronCIty All Stars' and I still can't believe the song exists!

What was the origin of the title 'Can't Fly without Gravity?'

I saw a bird flying one day in Vancouver the bird kept flying high then dropping letting Gravity pull it down then with a thrust of its wings it would soar to higher heights just playing with the wind and the gravity having fun in the sky. I was jealous. But in that moment I realized that it was actually the gravity helping the bird fly the very force pulling it down was equally responsible for its transcendence and that’s when it hit me -- You Can't Fly Without Gravity.

Once the record arrives, what are your plans?

What is your 'Knowledge of Self?'

The sound of a stone plunking in the water.

When Nas mentioned that hip-hop is dead, you had agreed with him then. Do you still feel that way or is it witnessing a rebirth?

Can you be born without dying?
Where were we all before we appeared in our mamas womb?
Where did we come from?
Does all being come from non being?
For something to be new it has to be old first like the pair of shoes we replace. Death is a natural part of life. Mankind is afraid of death because he doesn't want his memory to end but then again, Sometimes I don't even remember some of my own lyrics.

We gotta let it go.  People say 'you only live once' but that’s the mentality of someone who wants to rule the world they live in and .. will do anything to do so.

Hip Hop is not a person ... its a style made by people and when those people get old... so does the style. The key is not to get old. The key to not getting old is letting everything go and being like a newborn child who doesn't know the value of a dollar bill.
Posted by Salvatore Bono at 2:01 PM