Big Boi took to social media to confirm his collaborative album with Phantogram is finished. No release date nor other info was given.

The surviving members of The Faces - yes, even Rod Stewart, are reuniting for the first time in 40 years for a special charity concert next month in Surrey, England. Stewart posted on the band's site: "This year is the 40th anniversary since The Faces parted ways so it’s about time we got together for a jam! Being in The Faces back in the day was a whirlwind of madness but my God, it was beyond brilliant. We are pleased to be able to support Prostate Cancer UK."

Jimi Hendrix's July 4, 1970 performance at the Atlanta Pop Festival will be the subject of a new documentary called Jimi Hendrix: Electric Church, that will air on Showtime next month. The film will feature Paul McCartney, Kirk Hammett, Steve Winwood and others who will note the importance of this performance from Hendrix in the scope of his career. It will also be released as a Blu-Ray / DVD in October.

Parquet Courts will release their new EP, Monastatic Living in November via Rough Trade. Take a look at the cover, below: 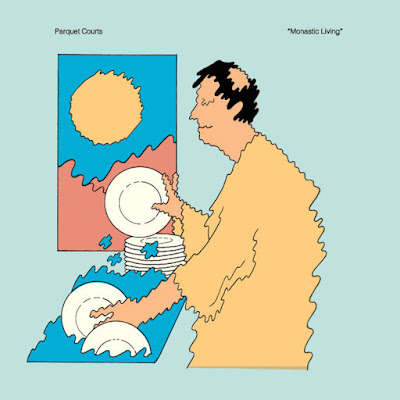 Posted by Salvatore Bono at 5:53 PM