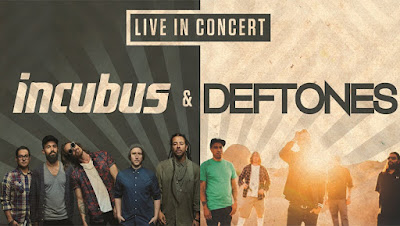 Maybe it is the nostalgia factor or maybe it is because they both hail from California and have had an influence on the generation they played in front of -- but the idea of Incubus and Deftones co-headlining a tour in 2015 just felt and sounded like a great idea.

The California bands have been on a trek all summer with Death from Above 1979 and The Bots and their four band packaged tour finally hit the East Coast and Jones Beach Amphitheater in Long Island.

The venue is very special for both acts. In the late 90's it is where Deftones would play some of their biggest crowds at radio station KROCK's Dysfunctional Family Picnic, then eventually returning over the years, most recently in 2013 when they co-headlined with System of a Down during a torrential downpour. For Incubus, it was in 2001 during Moby's Area: One festival and then eventually on their own headlining tours. Since both bands love the ocean and beach so much, this is the best place see them as they brought their West Coast flavor to the other side of America.

Deftones, who will be releasing a new record this fall did not give fans a taste of what was to come, instead brought out the hits and deep cuts to their 80-minute set. Opening with "Diamond Eyes," "Rocket Skates," and "Tempest," that triple threat set the bar right away. As the sun went down, and singer Chino Moreno's sweat stains were showing on every part of his clothing, the fans were packing in as they rushed out of work and to the venue to see the band. While Incubus would be the headliner, Deftones knew the audience. Making their set their own, they didn't hit too many aggressive tracks like "7 Words," "Elite," or "Rats! Rats! Rats!," and instead opted for more melodic tracks like "Sextape," "Digital Bath," "Be Quiet and Drive," and "Change," though they did manage to sneak in "Knife Prty," and "Headup." As the sun sank into the ocean, they brought the fury with "Bored" and "Engine No. 9" which would feature a mashup of Cypress Hill's "How I Can Just Kill A Man." Deftones, who are always on the road, always promise a solid performance and they delivered on that.

Following a brief intermission, it was the boys from SoCal's turn to please the crowd. Incubus came on at a quarter after nine opening with "Nice to Know You," the alt rockers had the darkness of the night as their companion as they were backed by a massive screen and light show. Their set was a trip down memory lane for the audience in attendance. Unlike Deftones, who have hit a musical Renaissance in recent years, Incubus have laid low, even going on hiatus in 2011 after the release of their dismal If Not Now, When? They quietly released an EP, Trust Fall, this year. So, hitting the road and playing amphitheaters again, they knew they had the please the fans and give them what they want. Playing the hits like "Anna Molly," "Pistola," "Vitamin," and their fantastic new single "Absolution Calling," "Wish You Were Here," "Drive," had the crowd engaged. Yet, it was songs like "Vitamin," "Circles," "Are You In?," that had the hard core paying customers totally thrilled. As they reworked classics like "Pardon Me," and "Megalomaniac" -- which featured parts of Nirvana's "Come As You Are," and jammed through "Sick Sad Little World," "Trust Fall," and the night's closer, "A Crow Left of the Murder," everyone went home happy. This is a band who you forgot how many hits they had and when you hear them, they hit you and bring you back to a moment in time.

While both of these bands have been crafting music for over 20 years, their fanbases have grown older and in some cases, larger, but one thing has not changed, they still look like they are having fun on stage after all these years.
Posted by Salvatore Bono at 6:55 PM