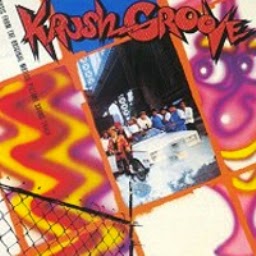 Film's like Wild Style and Krush Groove that brought hip-hop out of the streets of New York and into the masses, their soundtracks are just as important, if not more important, than the film's themselves. In 1985, Krush Groove was released and was loosely based on the early days of Def Jam records being formed in The Big Apple. With real acts like Beastie Boys, Run DMC, Kurtis Blow, LL Cool J, Fat Boys, and Chaka Khan having small parts in the flick, they also lended their talents to the soundtrack.

While the film was a sleeper hit when it was released, the then-only vinyl pressed soundtrack topped the R&B charts at 14. When CD's were invented, only 1,000 copies were pressed, Now, 29 years later, this soundtrack helped propel hip-hop to an audience that would have been shunned for far to long from the genre. With other musical contributes from Debbie Harry, Gap Band, and Shela E., Krush Groove's soundtrack is one to treasure.
Posted by Salvatore Bono at 6:50 PM