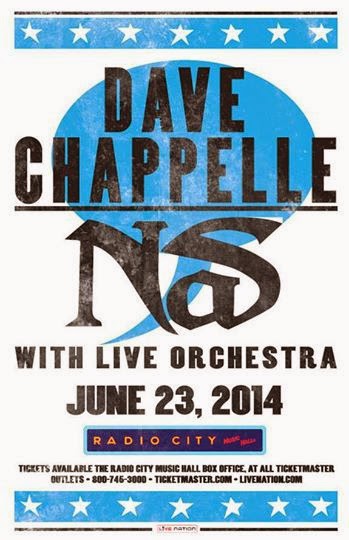 It was an unprecedented return to the stage, the announcement of 10 performances at Radio City Music Hall by reclusive comedian Dave Chappelle. At the halfway mark, Chappelle welcomed Nas backed by a full orchestra for his 5th concert, after going four nights alone at the landmark New York venue. Other nights will include The Roots, Janelle Monae, Busta Rhymes, Erykah Badu, backing Chappelle. Many would ask, why now? Where has be been? Well, for starters in the 10th anniversary of his landmark Block Party concert in Brooklyn from the summer of 2004 and it has been at least 10 years since Chappelle has done anything of this magnitude. So, in theory, why not. As the shows rolled out their announcements, more were added due to demand, but each addition was a special edition of entertainment.

For Monday nights installment, it was the iconic funnyman and the iconic Queens rapper together on one stage. As soon as you entered Radio City, it was transformed into a utopia that could only come from the mind of Chappelle. In the lobby a jazz band performed, while on the main stage a DJ was spinning classic hip-hop, there was an opening comedian and enough anticipation you could cut with a knife. At 8:35, Chappelle was ready, the crowd was ready, and while it was his fifth night doing this, it seemed like it was his first. As a white scrim played his large shadow smoking a cigarette, he strutted on stage like James Bond to thunderous applause. He joked about how he has been away for a decade and says it felt like being locked up. "People come up to you and say, damn, you got thick!," he joked. He touched on everything from leaving his show behind, "It seemed like a good idea at the time," to what he has been doing, “A fucking phenomenal decade of just goofing around. Hell of a thing to quit a show like that," to Donald Sterling, "A rich, white dude said some racist shit. Color me surprised!" It was classic Chappelle. He joked about his family life, his excessive masturbating, his sex life, race issues, gay rights issues,  and he gave it that flair that only he could. For the one hour he was on stage, it was as if Chappelle never went away and if this is a comeback, it was a comeback for the ages.

After a brief break, Chappelle returned to the stage to introduce Nas, saying, "There is so much that can be said about this guy, but we all know it. It doesn't need to be said. Here is Nas!" Just a year-and-a-half after Nas sold-out Radio City at his New Year's celebration in 2012, he was back, this time with a 50-piece orchestra performing most of his classic debut, Illmatic in full. With the help of DJ Green Lantern and an additional drummer, Nas took his classic album, which is celebrating it's 20th anniversary this year, to a whole new world. He admitted that he only had rehearsed with the orchestra once, which was the day before the show. The songs were slightly down tempo, but it was a whole new experience to see those tracks and hip-hop's finest take on a classical form. In between songs as the orchestra tuned, Nas opened up about what it was like growing up in the harsh Queensbridge projects, it was insight into the mind of a genius that still has an effect on him, 20 years later. After performing just the first six tracks off Illmatic with the orchestra, Nas jumped into a safe greatest hits set that included, "Hate Me Now," "I Can," "Made You Look," "If I Ruled the World," with just Green Lantern and a drummer backing him. What was a solid set, would have been made greater with him finishing the album and keeping the strings around for "Hate Me Now," but for what it was worth, it was still a sight to be seen. Before closing into his epic, "One Mic," Nas thanked Chappelle for inviting him to be apart of his history, he thanked the orchestra and then the crowd. As he was coming to a close, Chappelle joined him for the final bows, marking the end to an extraordinary night.
Posted by Salvatore Bono at 6:37 PM