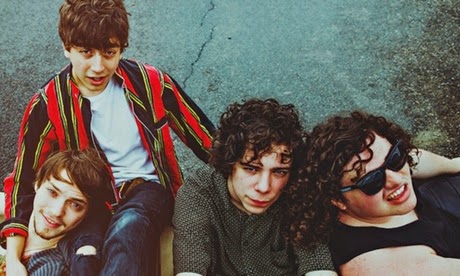 Last month before we caught Eagulls at Mercury Lounge, a rising Chicago band opened the night at Mercury Lounge and blew us away, that band was Twin Peaks. The band, who look like they are hardly over 16, yet, all just turned 20, bring a perfect sense of garage rock and pop-punk to their wild sound. With enough energy to make the creatures of Red Bull look exhausted, Twin Peaks are a band that will certainly be taking the American music scene by storm. In August, the band will release their debut, Wild Onion, which will build on the sound they crafted with their acclaimed EP, Flavor, that came out last year. If you are a fan of Blink-182, The Front Bottoms, The Strokes, and The Libertines, this a band you must checkout. Get on them now, by the time their debut arrives, you can say you heard about them here first.
Posted by Salvatore Bono at 2:38 PM