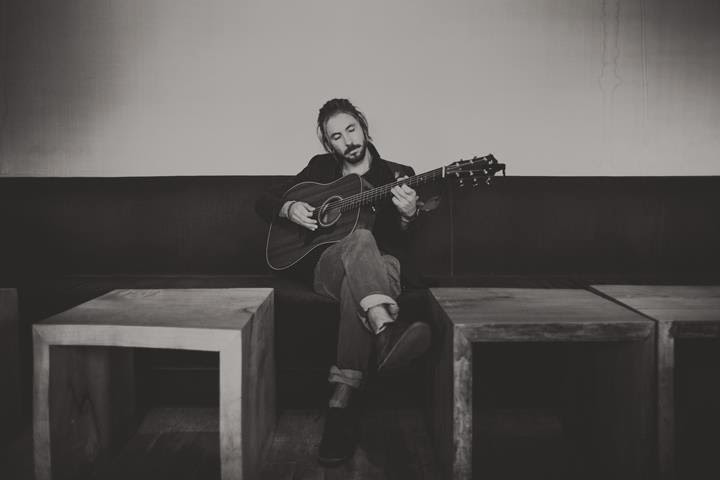 As the music world descends on Austin, Texas, this weekend for the start of SXSW, artists from all over the world will looking for exposure, new fans, and most of all, a way to generate buzz. One of those artists looking to do this is South Africa's Jeremy Loops. Loops, who is currently the No. 1 artist in his country is looking to cut his teeth in the U.S. this spring as he gears up for the release of his latest record, Trading Change. The Cape Town based singer/songwriter is much more than another musician, he is also an activist with his social atavism brand - GreenPop. Before Loops goes to make people swoon in Austin, we spoke to him about his music, influences, and trying to make the world a better place. Take a look at our interview with Jeremy Loops below:

You celebrate the essence of South Africa in your music with booming rhythms and folk-like storytelling. Was it your intention to grab hold of what was around you and let it inspire song?

It would be a lie to say it was a deliberate intention as opposed to instinct. Right at the beginning of my career, I read an interview where a musician I really respected said 'tell your own story. Tell your truth.' I can't quite remember who it was who said that, but that's what I set out to do. I can never be a better you than you, so why would I be someone else? You can never be a better me than me, so why would I be someone else? And I am South African, so I think there is an inevitability of that coming into my music.

In recent years, Civil Twilight, The Parlotones, John Wizards, and BLK JKS, all very different sounding bands have gained some attention here in America but never achieved the massive rise they should have. Do you feel that it is much harder to break it in this country coming from your country?

Hell yeah, it's way more difficult. Way, way, way more difficult. The difficulty is part geography and part the global media landscape. Here's the thing - if you're a reporter in New York, and you have hundreds of really interesting NYC bands to cover every day, and then thousands of American bands, why would you work extra hard to find out what's happening elsewhere? So our approach is to work really hard to be in your face, in your space! The downside is it is really expensive for us to tour the U.S. just to break the market. Airfare is a killer. But we've been saving our pennies and investing wisely in the band, our team, and our partners so that we can give it a genuine shot.

One thing I will say, though, is it is definitely not the quality of the music. We just have to work harder. We're prepared to work hard and take risks.

South Africa is the rainbow nation, and it seems as if you play off that idea. You paint a picture in the listeners head with various styles of music. Who are some of your influences?

I grew up on Bob Dylan and Woody Guthrie. Woody especially is an icon to me. Domestically, there was a point in my youth when the whole country was crazy about Mango Groove. Hugh Masekela has also been an influence over the years, and him and I have recently become friends. It's crazy. Also, I'm not sure if this counts, but I consider Rodriguez one of our own. Ha. And he's great.

You are based in Cape Town, how has that city influenced your work?

To be honest, most of my work ethic developed abroad while working on a super yacht. Our work hours were irregular, but highly condensed. It helped me learn to compartmentalise tasks. So I'd work intensely for like 8 hours of the day, and then work on music for 6 hours thereafter. When I got back to Cape Town, I was able to add surfing to my routine, which I really missed while working abroad.

I will say that in order for us to break around the world, we have to work like New Yorkers work. Super intense when we're working, but play really hard when we aren't, else we'll burn out. I'm still searching for balance, though. It's elusive.

You are a big fan of collaborating with other artists. Who would you love to work with?

I met a really talented British musician named Lucy Rose in Prague recently. I'd love to work with her. I'm also a big fan of Andrew Bird's, and I'm curious what he and I could do together. Shakey Graves is cool too. I also grew up on mid 90s soulful rap, so working with someone like Mos Def, Q-Tip or anyone who comes from that era or, rather, that etho, would be cool to work.

Thanks to your infamous loop pedals, you are a one-man band. Do you ever wish to expand this into a full on group that backs your or are the loops just too much fun to play with?

I've found the perfect balance, actually. My friends and long-term collaborators Jamie Faull, who's on sax and keys, and Motheo Moleko, who raps, are always with me, so I always collaborate with them. For our larger shows, we routinely scale up to six musicians. But what I've done is hybridised the two - I always have my loops but we have a band playing around that. And this way I can scale the experience during the show, first starting alone and then growing all the way up to six people by the end of the gig.

Aside from making music, you are an activist and protest the deforestation in your country. To those that simply do not understand, why is this so important?

Deforestation and the rate the planet is degrading at are kind of like a hairline crack on a tile. It seems innocuous at first, and then, before you know it, you've fractured and broken the whole tile. People don't realize that this is actually where things are for earth. I think very few people think the threat to the planet, and our environment, and all life is actually imminent, but it is. This is what we're trying to do. Make caring for the environment cool, so that people lose these stupid associations with tree hugging and the like, and instead realise that we're in serious crap and need to do something about it.

Tell us about GreenPop, your social activism brand.

Activism is a bit of a misnomer for what we do at GreenPop. GreenPop, the company I co-founded, plants trees in under-green communities all around Southern Africa. We don't just advocate for trees, we actually get our hands dirty and get stuck in, so we prefer the quite literal 'tree-planting organisation' as a designation instead. To date, we've planted over 40,000 trees, and we're looking to breach 100,000 soon.

You grew up during Apartheid and then during the Mandela reign, how did the shift in political and social power change you not just as a person but also as a musician?

Thats a tough question...I suppose as a person I have been saddened my entire life by the way governments and countries are mismanaged. The misuse of political power and the abuse of human rights is something I am very aware of because of how in your face it is growing up in a country like SA. But my frustration is not with SA alone. If you look just a few hundred years into our history, you'll see exactly where and why all of this came to pass, and realise that so often Africa merely suffered as result of injustices forced onto it. Some countries got rich off the backs of slave labour and left the countries behind in ruin. I can't separate this frustration from my personal life or my music, but I do hope to be able to send a positive message of change through what I put out there.

When people hear your music, what do you want them to take away from it?

That even in the most difficult, most heart wrenching, and trying situations we actually land up in as people, joy or happiness can still be experienced in a moment or through those trials. That's what my music is. I try make music that brings people joy and happiness as a response to all the other difficult shit we experience out there in the 'real world'.

What is next for Jeremy Loops?

Releasing my debut album Trading Change in the U.S. in June this year is a major goal for us. We'll be touring the States a bunch this year in support of it, too. Similarly, we have major plans for Europe as well. We've made an album we're really proud of, but my first love is performing on stage, and traveling the world doing so is the trifecta. Basically, I'm feeling really good about 2015.
Posted by Salvatore Bono at 8:59 AM