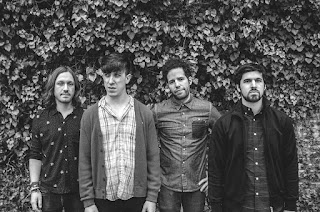 Earlier this month we introduced you to The Kickback, a fantastic new band from Chicago that impressed us at CMJ and look like they have a bright future ahead of themselves. The band, whose sound we felt was a cross between The Stone Roses and Wheatus, have incredibly catchy songs that certainly evoke dark humor and off-beat lyrics. The band released their debut, Sorry All Over the Place, earlier this year and have been touring the album non-stop, gaining new fans along the way. We spoke to singer and front man Billy Yost about his lyrics, the band's formation and inspirations. Take a look at our interview, below:

Moving from your parents home was a big deal, what eventually prompted you to make the move to Chicago instead of New York or LA?

While I’d toured a bit and visited a lot of cities in college, I was still a recent grad from South Dakota who had spent the bulk of his developmental years within half-a-mile of corn at any given time. New York and LA both seemed like such a foreign concept that it just wasn’t appealing. Our band at the time lived in a farmhouse outside of Vermillion, SD where I went to school and I just remember we literally stood in the kitchen after practice and picked a city. It’s a good music town. It’s still the Midwest. And I didn’t feel in danger of becoming a complete asshole.

The band came about via Craigslist ads, when how many people did you audition before figuring out this is the band you want?

I found out really quickly that the more ludicrously specific you are with a Craigslist ad, the fewer the responses but the better the odds. “Looking for a guitar player” usually nets you about 57 replies from 50 year-old dudes (no disrespect, I will be there, too) who want a once-a-month gig and can maybe play an out-of-town show ever other year with clearance from the babysitter (again, no disrespect at all. Music’s for everybody, right?). After I figured out the approach, the rest was just sort of waiting for Jonny and Eamonn to respond. I knew Eamonn would be right as soon as he emailed me back and I creeped on some Youtube footage I found. Jonny’s a little bit of a different beast and I think freaked out everybody our first practice, but it was all for the best. There weren’t any other bass players but Eamonn. I think maybe two other guys jammed with us before Jonny.

Chicago seems to be a place that is fulfilling and amazing but you had a pretty frightening experience when you first moved there. You had gotten robbed, what happened?

Our van got broken into pretty quickly after we moved, then somebody came in through the bathroom window of my brother and my apartment and stole a random assortment of valuable-ish items. We lost a bunch of music we were working on. It was just a rough time trying to get on our feet and being freaked out about moving in the first place. Moreover, I take about three baths a day and the bathroom is a room I take pretty damn seriously, so it felt kind of a like a direct shot at my pride. I called my girlfriend at the time just flipping out and she had to talk me off the ledge. It was ridiculous.

How has Chicago influenced your lyrics and work as a songwriter?

I’m not sure on that one. I know the city has given me a lot of perspective about just how little I matter, and in a good way? I watched the Wilco documentary every night for about six months when I moved here. I’d fall asleep right around the part they where they kick out Jay Bennett until I started having nightmares about it. My lyrics, for better or worse, tend to be pretty selfish. It’s mostly me. I know it took me a while to grow up here. It’s been an ugly couple of years, but I’m glad I was in Chicago for it. There are people here that you would define categorically as “Solidly Midwestern.” And a boatload of them. They’re the people you want on your side and on whose side you’re proud to rep.

The band released their debut, 'Sorry All Over the Place,' what does the title of the record stand for?

It’s a footnote from David Foster Wallace’s Infinite Jest. There’s a filmography of a bunch of fictional movies that this fictional character made. Sorry All Over the Place was one of the unfinished ones. When I saw the title, I was sitting in the bathtub and started laughing. This book weighs multiple pounds, and it was the only time I’d been at risk of ruining a book in the tub. The title was there before most of the songs were.

What do you want people to know about The Kickback?

I love it so much.

Jim Eno from Spoon was sent one of your demos and liked what he heard that he helped produce your record. What was it like working with him?

Jim is the slightly-less-known “Nicest Guy in Rock and Roll” after Dave Grohl, I think. Jim is a guy you want to be around. He makes the room a better place. I think we stressed him out. He said no band had made him eat that many meals over the console before, but he was also the cheerleader of the deal. We needed him to be because my typical working mode is varying shades of “pissed off” and “not-quite-as-pissed-off.” It’s a drag to be around in a creative environment. But we’d wake up to a text that said, “This shit is going to be hot!” and there’s just no accounting for how much having one of your musical heroes be actively excited about recording your stupid songs can push you through the low times. Jim is one of my favorite people.

You made the record in Eno's studio in Austin, did that city influence your songs? How did the music change from Chicago to Austin?

We were either A) in the studio or B) sleeping, so had Jim’s place been parked next to a year-round Christmas store and strip club, I think the record would have sounded the same. Smell, maybe. Maybe.

From influences that range from Spoon, The Police, to 60s rock to David Foster Wallace, how do you sum up The Kickback?

Right now I’d like to be Mike Patton singing for Tom Petty & The Heartbreakers. That’s just this week, though. We’ll see.

It took seven years to make this band, now that it is here, what are your goals?

That’s tough. The band name should have changed a few times over the years, but I’ve just hung on to it. The four of us have only been together for about two-and-a-half years. This is the group. This is us. I hope you like it. I hope we can get to a place where we feel too successful and like we’ve sold out every ideal we’ve ever had and abandoned those people that cared most about us. We’ve been in the van for a long time. It’s a nice sick thought at 2 a.m. driving through northern Pennsylvania. I just would like the next record to be better than the last. And to have statues erected in our honor.

What is next for The Kickback?

I want to do a holiday special in a television studio. Puppets. Forest scenes. Group tidings and goodwill towards men. That would be great.

What was the transition from South Dakota like to a big city such as Chicago for you?

There were considerations that seem pretty routine for a lot of people that took some real adjusting for me. Things like locking the door. I mean, it was genuinely the first time I’d had to remember that this was part of the morning routine. If you’ve spent any time in the Great Plains, you account for miles in minutes. If it’s 30-miles away, it will take 30-minutes. And you wave a lot in the car. “Hay seed” is I believe what comes to mind here.

Posted by Salvatore Bono at 9:19 AM