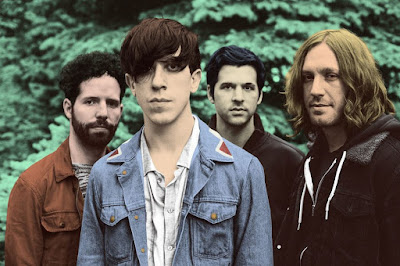 Over the years CMJ Music Marathon went from being a festival where bands and artists perform and get their name across and attempt to get their career to break out to a festival, like SXSW, where the attention is on the already established acts playing a giant party. Yet, once in a while you find an artist, a diamond in the rough, at these festivals that you hope becomes part of the next big wave -- this year we found Chicago's The Kickback.

The indie rock band combine the sound of The Stone Roses meets Wheatus. That is what makes them so unique, it is well produced by still raw. While the sound is what drives your attention, singer Billy Yost's off-beat lyrics and dark humor sustain your attention and leave you wanting more. The band released their debut, Sorry All Over The Place, earlier this year and as they promote the record it is time you bring yourself to one of their shows.
Posted by Salvatore Bono at 9:23 AM