NEVERMEN, the new band featuring Doseone, TV on the Radio's Tunde Adebimpe, and Mike Patton will release their debut self-titled album in January.

In September, Damon Albarn revealed that he worked with Adele on her new album to Rolling Stone and said the singer was "Very insecure." Now, she is fighting back telling Rolling Stone: "It ended up being one of those 'don't meet your idol' moments, and the saddest thing was that I was such a big Blur fan growing up. But it was sad, and I regret hanging out with him. None of it was right," she told Rolling Stone. "None of it suited my record. He said I was insecure, when I'm the least-insecure person I know. I was asking his opinion about my fears, about coming back with a child involved—because he has a child—and then he calls me insecure?"

It has been confirmed by Bad Brains via their Facebook account that guitarist Dr. Know is on life support and they are urging fans to keep him in their thoughts. The band said on the social media account: "The Bad Brains family ask that you please keep Gary (Dr Know) Miller in your thoughts and prayers. The family respectfully ask that their privacy be honoured during this time and very much appreciate all the great energy that is being sent their way." We are thinking of him! PMA to Know!

Santigold revealed that her new album will be called 99¢, and revealed the cover. No release date was ever given. Take a look at the cover, below: 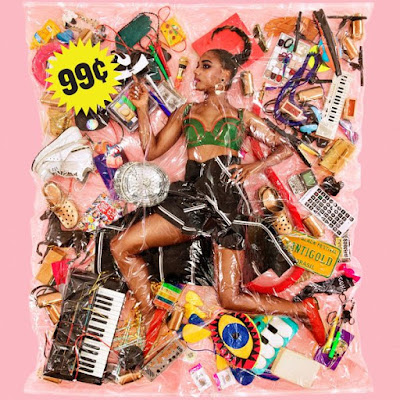 Posted by Salvatore Bono at 3:38 PM