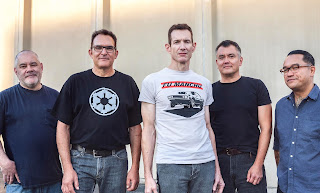 In the early 80s, Chicago's Naked Raygun became one of the most influential and one of the first punk bands to emerge from the Windy City scene. The band, who influenced everyone from Dave Grohl to Alkaline Trio and Rise Against, and many of the modern era. Now, after reforming a decade ago, the band will release new music next year. We spoke to singer Jeff Pezzati about their comeback, influence and how opening for Foo Fighters this summer at Wrigley Field was a career highlight. Take a look at our interview, below:

Getting back together and recording a new record, what was it like being back in the studio?

Being in the studio has always been a great experience. I mean who wouldn't like their ass kissed while ordering food delivered at any time .... all while surrounded by a place that looks like the inside of the Battalstar Galactica...and an engineer who is turning knobs making lights flash the likes of which I can only begin to fathom their purpose.

Is 'Broken Things" about patching up the relationships within the band and picking up the pieces?

Eric wrote the song , so you should really ask him.... I read into it as reaching a point in your life when you thought things should be on automatic and finding out that despite all of your planning, things haven't  turned out so seamlessly..


What took so long to make new music?

All of the band writes songs...... usually a member will have a large piece of the song completed before bringing it up to the band. I personally find that as time has gone on I have become very picky about what I think is good and what I dismiss as 'not good enough'.

In 2016, we get our first new Naked Raygun record in decades, what can fans expect?

For many, the band were introduced to a whole new audience thanks to Foo Fighters' 'Song Highways," what did it mean to you to have Dave Grohl call you heroes and influences to him?

It was very humbling. I mean here's a guy who has been extremely successful in two bands - telling us that we had  an effect on him. It's nice to know that the passing of the torch has been completed and we did our little part to mold musical tastes away from the 'Darkside.'

Hailing from Chicago, you opened for the Foos this past summer at Wrigley, what was that moment like?

It was arena rock at its finest. I wish that more of our friends and fans had been able to get tickets.

Chicago has changed drastically since you first started, does the city still have an influence on you?

Yes it sure does. Chicago is in our blood. It means a to to me that our largest fan-base is here. I love this town and all it has to offer.

Punk owes so much to you guys, being pioneers of a certain sound, do you ever look back on your career and just say, 'Wow?'

I don't look back that often but when I do I wished that we had toured more and written a couple of more albums. I think we could have done more.

What brought on the reunion 10 years ago and what was it like getting back on stage together with each other?

Eric got the band back together for a Riot Fest show and he also arranged for us to play a Stiff Little Fingers song with the great Jake Burns - who had relocated from Ireland to Chicago - Unreal !!!!!