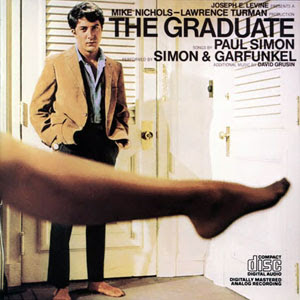 When a group or an artist signs on to do a soundtrack it can go either way -- sometimes it is music that just fits the film and doesn't go beyond that but sometimes it goes beyond the film and becomes more than that as it hits the lists as not just a great soundtrack but great album. For Simon & Garfunkel, their 1967 soundtrack to The Graduate went beyond a collection of songs for a film but massively successful album for the duo.

Songs like "The Sound of Silence," "Mrs. Robinson," "Scarborough Fair," "The Bright Green Pleasure Machine," were more than just singles, they became timeless masterpieces of pop culture and music. While The Graduate remains one of the greatest films of all time that still resonates today, the soundtrack is just as important and became the blueprint to what an artist can do working with songs for a movie.
Posted by Salvatore Bono at 7:56 PM