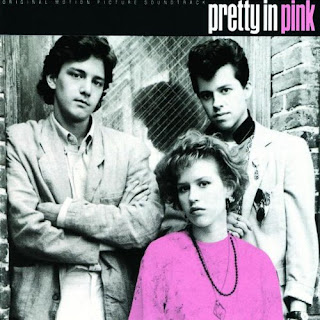 The 80s had a sound that was all together daring, experimental but above all, innocent and nothing captured the sound of the decade better than the soundtrack to Pretty in Pink. The classic music to the John Hughes motion picture will turn 30 next month and to celebrate we picked it as our Great Soundtrack.

With music from Echo and the Bunnymen, Psychedelic Furs, The Smiths, New Order, OMD, INXS, and others, the record captured the entire essence of what the film was about, what the decade was about and most of all, what the youth were about. Thirty years later, a majority of the bands are still listened to and now considered legends and eve contenders for the Rock and Roll Hall of Fame, the benchmark this soundtrack created proves why it is a timeless masterpiece.
Posted by Salvatore Bono at 6:46 PM