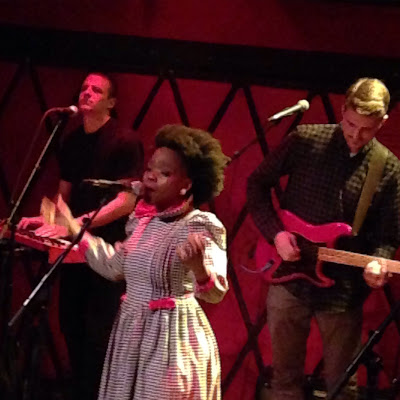 There are some artists you hear about and listen to and then there are some artists you just have to experience. New York via South Africa singer Tuelo is one of them. In September, we introduced you to the singer and her band, The Cousins, when we named them our Rising Artist. In their first show of 2016, they blew the roof off of Rockwood Music Hall and displayed a talent that left everyone dumbfounded.

Coming on just after 10 p.m. on Saturday night, the band hit the stage and straight away had everyone's attention. Tuelo maybe a diminutive person in size but she has a voice as big as our galaxy. Think of every great singer you ever heard and I promise, she is better than all of them combined. Her voice has just as much power as an Atom Bomb. Bringing the crowd through a series of emotions that left many in tears and then having them smile from ear to ear, Tuelo is not just a talented singer she is the songwriter that many Grammy winners wish they were. In her voice there is despair, vulnerability, agony but there is also hope and joy. Singing in both English and her native South African tribal tongue of Setswana, she never loses her cultural identity. With enough soul power to start a religious experience, she and her band mixed African rhythms with jazz, funk, rock and R&B. It is cultural diffusion at its finest.

As they played songs from their upcoming EP, which is still untitled and awaiting a release date, they performed new songs like "St. Margaret" which is an ode to the singer's mother and even managed to throw in a cover of Britney Spears' "Baby One More Time," that had Tuelo chanting "Britney forever!" As the crowd laughed and joined along, it was that blend of her heritage and American pop where the balance lies.

Once their set ended, the crowd were left feeling speechless as to what they just saw and heard. There is not a single songwriter you will listen to this year that has the grace and talent of Tuelo. Adele can have all the success in album sales she wants, Beyonce can still rule the world, but even they would bow down to this African Queen.
Posted by Salvatore Bono at 9:46 AM